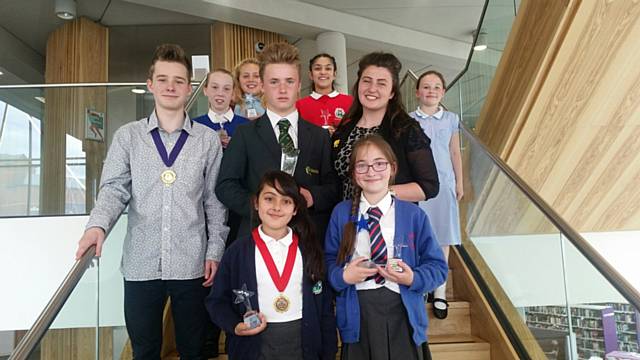 Zara Shah, a student at Marland Hill Primary School, Rochdale, has been elected as the 2015/16 Children’s Champion following a ballot of over 70 primary schools in the borough, with 8,221 votes cast.

Zara, 10, won with 21% percent of the vote with her three campaign pledges - to fight against smoking, for more youth clubs and for cleaner parks for young people to enjoy.

Upon accepting her role, Zara said: “I want to thank everyone who voted for me and supported me. I also want to thank the candidates for participating with me. Now that I’m Children’s Champion, I know that I have to try my very best and I’ll make the children of Rochdale borough proud.”

Stephanie Webb, 10, from St James’ C of E Primary School in Wardle, was voted Deputy Children’s Champion following her pledge to campaign for summer activities to begin earlier in the day to include more children, for free school milk and free music lessons for all children.

As well as fulfilling their campaign pledges, Zara and Stephanie will now be responsible for representing the interests and views of the borough’s children aged eight to 11 through a range of activities, including at official ceremonies and even interviewing senior job applicants for council roles.

Zara and Stephanie were elected from a shortlist of six candidates, which also included Aqsa Shiraz, Lucy Gregg, Maria Kavanagh-Hoy and Rebecca Hayley.

The candidates then recorded a one minute video manifesto that was shown to primary school pupils before they then cast their vote.

The Mayor of Rochdale, Councillor Surinder Biant, said: “I was really impressed with all of the candidates. Each nominee gave a very confident, well-informed speech that showed just how aware they are of the issues that affect our borough, and I’m immensely pleased for Zara and Stephanie. I think they bode very well for our future!”