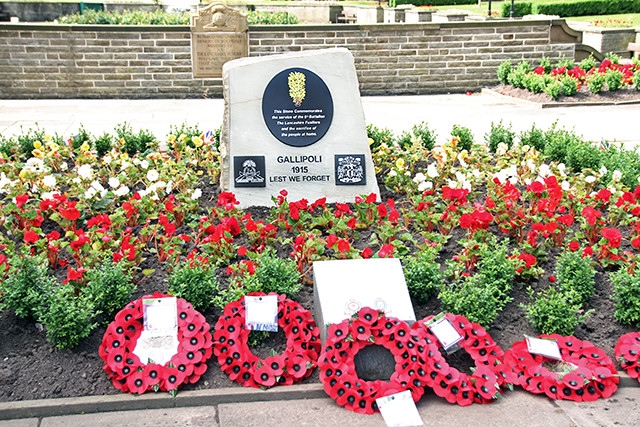 A permanent memorial to honour the service of local men who fought in the Gallipoli campaign, and the sacrifices made by their relatives, was unveiled at a special ceremony in Rochdale Memorial Gardens this afternoon (Sunday 28 June).

The ceremony, which saw local people line the pathways around the Memorial Gardens, started with a parade at 2.30pm on the Rochdale Market site; the parade, comprised of the King’s Division Band, serving members of the Armed Forces, veterans and cadets from across the borough, marched along Baillie Street to Yorkshire Street and turned onto The Esplande.

The stone was officially unveiled by Major Edmund Gartside and donated by the ‘Life for a Life’ charity.

Councillor Alan McCarthy, Lead Member for the Armed Forces at Rochdale Borough Council, said: "Many who went out to Turkey didn't come back home again and I think it's important that we stop for a moment and remember their sacrifices. So many local men died in the battle and we wanted to commemorate that in Rochdale.”

Lord Lieutenant of Lancashire Lord Shuttleworth said: “It was a great honour for me to be at the unveiling of this permanent Memorial to the heroes of Gallipoli and the 6th Battalion of the Lancashire Fusiliers. I want to thank the organisations that have made this happen and everyone connected in making this event.”

Council Leader Richard Farnell who also spoke during the ceremony said it is an honour for the town to have such a memorial: “Sunday was about remembering the sacrifices made by local soldiers and their families. It was truly humbling to hear about the acts of bravery and the sacrifices made during the Gallipoli campaign. The casualties were heavy, and the losses were many. The results of that campaign were not all that we had wanted to achieve, but nevertheless those men's bravery was the most splendid act. It is because of men like that, that we have the freedom to stand here, to unveil this fitting memorial to them.”

In August 1914, 1,000 soldiers from the 6th Battalion of Lancashire Fusiliers gathered in Rochdale before being sent to Egypt and on to Turkey. Few came home alive or unscathed. Those who enlisted were remembered last summer with the re-creation of a march made by more than 1,000 soldiers from the 6th Battalion of the Lancashire Fusiliers.

Following the ceremony, at 7pm in Rochdale Town Hall, the King’s Division Band played a concert to raise funds for the ABF Soldiers’ Charity.

ABF helps thousands of soldiers, former soldiers and their families in need each year.