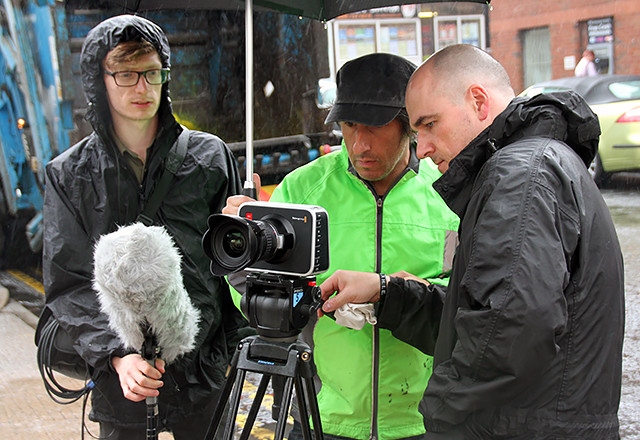 Rochdale film-maker John Farrington has been shooting scenes for his latest film in Rochdale.

The film, entitled ‘Two Souls’, tells the story of two women whose lives, independently affected by the Holocaust, are brought together by an act of humanity by one man.

Speaking to Rochdale Online, John said: “The film is based on real life events and intertwines these two stories. One of a Holocaust survivor from Prague who was saved by an SS officer and the other is of a local woman and about how she was brought up in that time.”

John and his team have been in Rochdale this week to shoot scenes for an upcoming trailer for the film.

“Filming has gone well so far and we are hoping to get the trailer together and out there within the next month,” said John.

John and the team were filming at Rochdale Post Office on The Esplanade on Monday (13 July). The Post Office was being used as the American Embassy.

John said: “The white on the back of the Post Office resembled the look we wanted for the American Embassy so that is why we chose the Post Office. We were shooting the scene of a journalist whose father works at the embassy and has access to some information, so we were filming them going into the building.”

John and the team are hoping that the film will be ready and released by the end of next year.

“We need to secure some funding for the film and then once we have that, we can start properly. We were originally looking at shooting in the summer of next year and are hoping for a release by November but we will have to see how things go,” added John.

If anyone can help John with funding, then contact him via john@willowtale.com