You are Here: Home » News » News Headlines » George Cross awarded to a modest Rochdale hero to be auctioned

George Cross awarded to a modest Rochdale hero to be auctioned 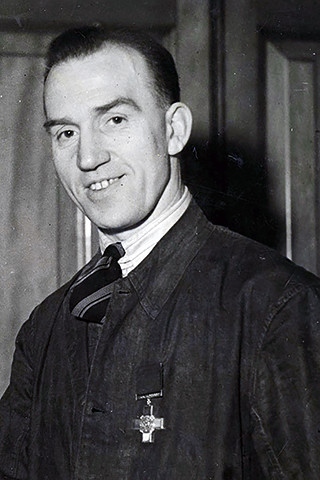 A George Cross medal awarded to Rochdale cotton mill worker Robert Wild, who extinguished a work colleague’s blazing clothing with his bare hands, is to be auctioned by Dix Noonan Webb, the international coins and medals specialists, at a sale of Orders, Decorations, Medals and Militaria in London on 8 September 2015.

The George Cross and the 1953 Coronation Medal awarded to Mr Wild are expected to fetch £4,000 to £5,000 and are being sold by a direct descendant.

Robert ‘Bob’ Wild was born in Rochdale in 1906, the son of Robert Wild and his wife Alice. The eldest of seven children. He was raised in the Halfpenny Canal Basin area of the town and was educated at the Parish Church School on Tweedale Street. At the age of 14 he went to work at the Dunlop Cotton Mills in Rochdale as an apprentice electrician.

On 10 July 1926 he was working in the electricity sub-station at the mills when his fellow electrician, Ted Matthews, had his clothes set alight by a shower of sparks. Wild extinguished the fiercely burning clothing with his bare hands, suffering first degree burns to his hands, face and upper body in the process. He was admitted to Rochdale Infirmary and it was some time before he was able to return home.

Mr Wild was originally decorated with the Empire Gallantry Medal in 1926 – one of only 64 civil EGMs awarded between its institution in 1922 and its abolition following the introduction of the George Cross in 1940. Holders of the EGM were then told to exchange their awards for George Crosses.

Mr Wild thus had the unusual privilege of attending two Buckingham Palace investitures for the same act of gallantry – receiving his EGM from George V in 1927 and his George Cross from George VI in 1942.

Despite holding a gallantry award, which is second only to the Victoria Cross, Mr Wild was a modest man.

His nephew Dennis Wild said after his death: “Robert was one of life’s gentlemen and never told anyone that that he was the holder of the George Cross and it was a rare privilege if you got him to mention it in any way. He was a quiet man, kept himself to himself, but was always willing to lend a helping hand to anyone who needed it.”

Another anecdote by Dennis Wild reinforces this reputation for modesty: “Sometimes in the late 60s or early 70s on a Friday night he would go along with me to the Royal Bowling & Billiard Club on Manchester Road, Castleton, Rochdale, of which I was at that time President. Several members who knew Robert persuaded him to bring his George Cross to the Club one Friday. That night there were many more members present as word got around that he was bringing his medal.

“The game on the billiard table was stopped, the players on this occasion were happy to do so, and the Club Steward, Mr John Gibson, placed the George Cross on the table. Members and guests formed a queue round the table. Some even asked if they could touch it.

‘Yes, just do as you wish’, said Robert as he stood shyly at the end of the bar. All of the members and guests came and shook hands with him. It was a very moving experience. He then asked in the most apologetic way if I could run him home. He was very emotional in the car and said, ‘People can be most kind when they want to be’.”

Will Bennett, spokesman for the auctioneers Dix Noonan Webb, said: “Wild was a classic hero, a man who saved his workmate’s life without a moment’s hesitation yet preferred not to talk about it. He met two monarchs – George V and George VI – at Buckingham Palace investitures but remained humble enough to be touched by the respect he was shown by members of his local bowling and billiards club.”

Mr Wild married Sarah Carey at Rochdale Parish Church in December 1938 and the couple lived at Brimrod Lane. After the war, she ran an off-licence in Barton Street, Rochdale, with her husband assisting her in the evenings on returning from work.

Mr Wild worked in the armaments industry during the Second World War but later returned to his job at Dunlop Cotton Mills until his retirement in 1972. A keen angler and member of the Dunlop Rifle Club, he died on 6 May 1976 at his home on Oldham Road, Rochdale. He was cremated and his ashes interred in his grandparents’ grave in Rochdale Cemetery.

Dix Noonan Webb Ltd is one of the world’s leading specialist auctioneers and valuers of coins, tokens, medals, military and paper money of all types. Established in 1990, the company boasts over 250 years' combined experience in this field and stages regular auctions throughout the year.