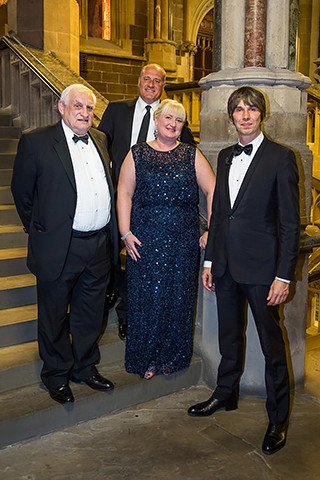 The Northern Lights Charity Ball has raised a staggering £100,000.

Held at Rochdale Town Hall on Friday 11 September, the event was raising money for Springhill Hospice, as well as other local charities.

To raise the incredible amount, the event held a live auction. Chef Andrew Nutter donated a four course gourmet dinner for eight in your home with champagne, canapes, wine and even the washing up thrown in. This alone raised £20,000. The Busby Babes item for Springhill Hospice donated by Colin Fleet raised £2,200 with several more items contributing to the sum raised. The event also incorporated a lucky dip, which local businesses supported by donating items and vouchers, raising a total value of £5,000, and a silent auction and a signed book raffle also took place.

Harry Bell, who is the current Rochdale Man of the Year, pledged when he received the accolade that he wanted to do a small event to raise funds for Springhill Hospice and Rochdale charities and put Rochdale back in the news for something good and positive.

As a retired director of the long standing family business H Bell & Sons, Harry has always been proud of Rochdale and proud to say he’s from Rochdale, however lately this has not been so and he wanted to change that.

Harry asked Professor Brian Cox, his nephew, if he would talk at an event in which Harry would sell tickets to about 60 people. When he mentioned this to his son and daughter, Chris Bell and Louise Scott, they told Harry that if he was doing an event for the town it had to be done in style and big. The event then grew to a 300 strong guest list, including the Mayor and Mayoress of Rochdale and MP Simon Danczuk.

Prof Brian Cox agreed a date and generously give his time freely to support his Uncle Harry. A committee was set up by Louise Scott supported by Chris Bell, Michael Scott, Beverley Wrigley, Steve Barton, Sian Barton and Christian Morris.

Main sponsorship for the event was provided by Develop and Hanson Springs and local businesses sponsored items for the event in the form of the table plan, menu, wine and water and raffle envelopes.

The venue was a "no brainer" to Harry, it had to be the town’s glorious Town Hall in all its splendour. Local chef Andrew Nutter, of Nutter's Restaurant, was then asked to support the event by creating a dessert – something he agreed to do without hesitation.

Nutter's Restaurant became a huge support to the overall event and Harry would like to thank both Andrew and his team at Nutter's for their tremendous support.

Andrew gave a private masterclass at Nutter's Restaurant to the catering staff of the Town Hall for the menu, which he curated and he provided his chefs Michael Pilkington and Sarah Riley to work alongside the Town Hall chefs John, Suzanne and Mary, to help them provide a mouth-watering five course meal.

Andrew also surprised the 300 guests with his team making and donating Foccacia bread to them.

The committee engaged local event organiser, Julie Perry to provide support and guidance and Julie transformed the Town Hall into a beautiful purple vision with lights and floral displays. Surprise entertainment in the form of 'The Singing Waiters' was also provided, with guests describing the venue as looking “magical”.

Prof Brian Cox gave a presentation with visual images to the guests and then followed by signing autographs and having pictures with guests.

Harry’s wish for the event was to raise a minimum of a day’s care for Springhill Hospice, which is approximately £8,000, and an amount for other Rochdale charities. His expectation for the night was to raise about £10,000.

When Harry was called to the stage to hear the sum raised, he was speechless and emotional and is still in a state of bewilderment. He went home that night and sat in his chair and had to ring his daughter Louise the next morning, as he thought he had dreamt the whole thing.

Harry would like to express his sincere thanks to all who contributed to the event in giving time, sponsorship and donations and to those who showed that we can be proud of Rochdale.