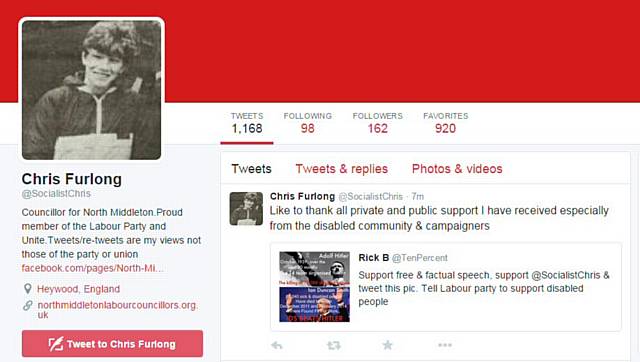 North Middleton councillor Chris Furlong has defended a tweet he posted that compared the Secretary of State for Work and Pensions, Iain Duncan Smith to Hitler.

The Labour councillor tweeted a picture of Hitler above one of Mr Duncan Smith, implying that the Conservatives were responsible for the deaths of more disabled people than the Nazi party leader.

“I am highlighting the government’s figures and used the tweet to give a historical comparison. If you look back through Twitter, you will see a lot of disabled people are supporting me in what I said.”

It is understood that the matter has now been referred to the Labour Party to investigate.

Councillor Ashley Dearnley, Leader of the Conservative Group in Rochdale, said: “The remarks are appalling and are totally unacceptable. I would expect the Labour Party to withdraw his whip. If the new Labour leader has anything about him, he will make sure he is removed from the Labour party.

“I know if David Cameron heard that any of his councillors made remarks comparing people to Hitler, then David Cameron would make sure that they were removed from the Conservative party. If Corbyn has any metal about him, his will ensure that this happens.”