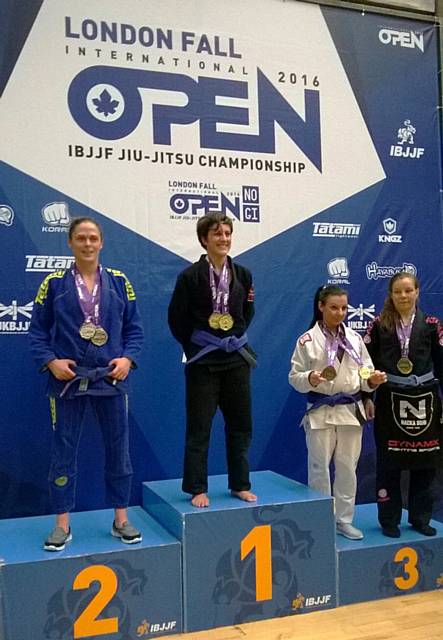 Sophie, from Rochdale, explained: “BJJ competitions are organised differently from judo, where you can be drawn against an opponent of any grade.

“BJJ gives competitors a chance to fight at belt, weight and age category, giving more opportunities of medal success to a greater number of fighters. For those who are successful in their own category, there is then the chance to fight in the absolute division”

In her featherweight competition, Sophie was completely in control, winning both fights with arm locks well within the five minute contest time.  She said: “At my own weight I feel confident and fairly relaxed at managing the tempo and intensity of a contest, so I am able to try out different techniques. It’s a different proposition, mentally and physically, when facing larger, heavier opponents in the absolute”.

So it proved on Saturday, when two tough, experienced and heavier fighters awaited Sophie in the open category.

Sophie explained: “Although there is a crossover between the two disciplines BJJ is much more about strength and technique on the ground, and my judo throwing skills are only useful in helping me get my opponent down on the mat. On Saturday I managed to exploit my strength and conditioning skills to pin down my challengers with subtle shifts in position, but it’s really energy sapping keeping control at that intensity level for the full five minutes against heavier ladies. Even now, after 28 years of elite junior and senior competitions, it's still a great feeling to succeed after exerting that amount of effort.”

Sophie’s London double now adds to her double European silver gained in Lisbon and her British Open gold from Coventry.

She added: “I’m off to Cardiff in November for the Celtic Open, but I will be moving up to lightweight in an effort to win the absolute – which would cover my travel costs to the Europeans, again held in Lisbon in January 2017.

"I’m busy juggling my family commitments with coaching and competing in judo and BJJ. I am lead coach for the British Judo Association Pre-Cadet Squad and the England Pathway Talent Identification programme. Hopefully, I am inspiring youngsters to achieve their full potential. Coaching is rewarding and fun, but I still enjoy the buzz of competing and next year I shall be targeting golds at the World Judo and World Jiu Jitsu Masters.”