You are Here: Home » News » Sport News » From judoka minor to senior master

From judoka minor to senior master 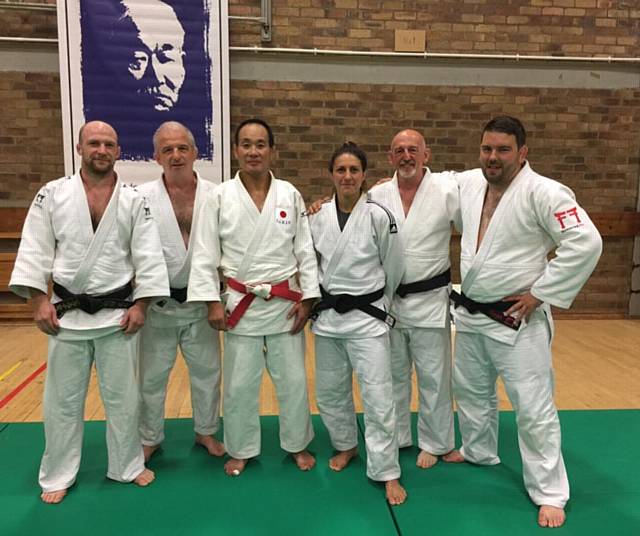 When, as a rebellious but likeable ‘little rogue’, Heywood's 10-year-old Danny Carr took up judo, he couldn't have envisaged the impact this would have on his future life. Winning a silver medal this year in his first British Masters event in Edinburgh after five tough fights, gave Danny a chance to reflect on his sporting journey.

He said: "I've had great support from my parents, despite giving them the teenage boy grief - ferrying me up to Bacup Judo Club, travelling to competition, paying for competitions, airfares, accommodation. Once just a local club member, now I have trained, competed and coached all over the world.

"I still regard myself as a Heywood lad and live in the borough, but it's been quite a journey to my present position. Trips abroad with the club as a junior were fun, challenging and rewarding. France, Holland, Sweden and Germany were the popular destinations. As a senior, my favourite trips were Miami, Canada, Russia and of course top of the list would be my visit to the spiritual home of judo, Japan.

“I've had the thrill of experiencing the Olympic Games in Athens as Sophie Cox's training partner. Sophie and I have a great training and coaching partnership. We’ve made numerous teaching and demonstration videos. We coach together at Bacup, Kendal and for the North West Performance Pathway programme of the BJA.

“Sometimes I have to pinch myself when I realise that I am now in the position of inspiring, influencing, and developing youngsters with abilities to develop to their full potential.

"At Kendal International Centre of Excellence I am in charge of the Advanced Apprenticeship in Sporting Excellence Programme. It is really rewarding identifying players with potential, providing them with the appropriate training, physically and mentally, and equipping them with the skills, experiences and knowledge for future achievements.

"It's not all about elite judoka. We have a great programme involving children's from disadvantaged backgrounds, and we coach all abilities in the many schools we visit."

The founder of judo, professor Jigoro Kano, saw judo as much more than competition: judo is a way of life. Danny explains Kano's philosophy. "Kano's goal was to develop students with a scientific attitude of observing realities, a sense of justice, fairness and modesty. The parents of the youngsters at Bacup Judo Club may not be aware of Kano’s philosophy, but that's what they are buying into. It's what lies behind their appreciation of the discipline, the physical and mental control, the social interaction and fun that is judo."

In competition terms, Danny has had a fantastic career both as a junior and senior. By the age of 13 he was travelling Europe, competing for GB, captaining the North West team and at 16 the GB team. He received a scholarship to train full time at the national academy at Bisham Abbey. He has a proud record of nine times Lancashire champion, seven times NW champion, 3 times national silver medalist, open champion for each of the four Home Nations Championships. and medals in Holland and Canada.

Using his extensive judo experience, Danny has also competed in professional mixed martial arts fights and is undefeated as a professional. "I owe my success in MMA to Bacup Judo Club, which gave me the skills and confidence of the highest order. I had to adapt my judo to a competitive 'no ghi' - fighting without a suit - situation and that in turn has given me new insights into judo coaching.

“I cannot thank coach Brian Moore, 7th Dan, and all at Bacup Judo Club enough for the opportunities and support I have been given. The life lessons learnt at Bacup will stay with me forever. Bacup Judo Club isn't just a judo club, it's an institution, a family with a reputation that is worldwide.

"As I first climbed up the stairs to the dojo above the library in the centre of Bacup, I was told that "This is the best club in the world”. I repeat these words to today's youngsters.

"Bacup Judo Club saved me and made me: it has given me the skills and experience to succeed in competitions. Most importantly it has shaped my life for good, and those life qualities are what I want to pass on.”