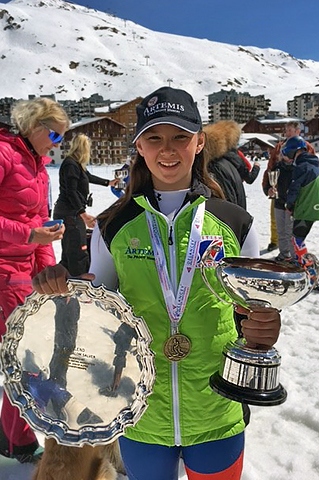 Rochdale’s Daisi Daniels has been crowned the champion of the U16 Delancey British Children’s Alpine Ski Championship in Tignes, France.

On Friday (7 April), the Beech House School pupil won the Giant Slalom and the title in addition to two medals in the Slalom and Super G events.

Day one of the champions was an exciting day: Daisi's first discipline was Slalom, which consisted of two runs down two different courses.

Daisi put in a good first run to be in second place behind the lead by only 0.10 seconds.

Her second run didn't go as well, but she did enough to take the lead and win the overall Under 16s Delancey British Slalom title.

Wednesday was the next discipline Super G, a speed event which is a one-run event.

The weather was not looking good with heavy snow but the event went ahead.

Daisi did clip a gate, losing one of her poles, but this didn’t stop her from taking second place and a silver medal.

The 14-year-old has had a fantastic start to the skiing season this year, with her other victories so far including: second place at the English Championships, three fourth place medals at the International Races in Andorra, three golds in the Anglo Scottish Cup and the Artemis British Ski Academy Championships.

Fiona Daniels, Daisi’s mum said: “Daisi winning the Giant Slalom and the overall under 16s Delancey British Children's Alpine Ski Championship has made us the proudest parents ever.”

Daisi said: “I’m really happy with the way the season has gone and I’m looking forward to the next season.

“I would like to thank my sponsors for their continual help and support: Beech House School, Chill Factore, Atomic UK, Fortvale and H Rigg Properties."