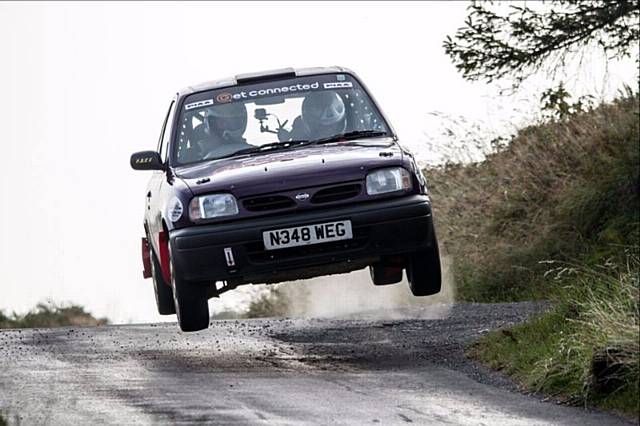 Rochdale rally driver Steve Brown took third in the two-wheel-drive category of the Belgium based Flanders International Rally Challenge (FIRC) last weekend, a feat made much more impressive by the fact it was achieved with his old, borrowed car.

With his usual Nissan Micra Kit Car out of action for opening few rounds of the season, Brown had secured a deal to contest the overseas championship in a loaned Honda Civic which would give him the opportunity to challenge for the class 3F and two-wheel-drive honours.

However, disaster struck whilst on a pre-season test in Wales when the Honda was side-lined by transmission issues at the beginning of April.

When it became apparent that the parts required to fix the transmission would not be available in time, it was looking likely that Brown would have to withdraw from the opening round of the season at Rallye Salamandre.

Just days before the event in Belgium, Brown had exhausted all possibilities, and was ready to pull the plug on his campaign, when the opportunity of using his old Nissan Micra came about. Brown last used the car in 2015 and whilst it wasn’t as powerful as his kit car or Honda, was a solution to enable him to contest the event.

Brown said: “It was pretty much a last ditch effort to be able to still go to Belgium. It was a no-brainer for us as we really just needed to get some points on the board and as it was a much lower power Nissan than I`m used to, it actually fitted perfectly into our plans.”

Brown soon settled into the Micra again and with regular co-driver Paul Stringer alongside, the duo did their best to stay out of trouble on the arduous closed public roads of Hainaut.

Crossing the finish ramp on Sunday evening after over 100km of action, Brown brought the Nissan back in third place in the 2WD section of the event.

At the finish, Brown said: “Well that was certainly an experience.

“To think a few days ago we weren’t event coming over it’s pretty fantastic to think we now have our first points on the board for the season.

"It’s great to be back behind the wheel of the old faithful again and despite being a little down on power, performed faultlessly.

"I must say a huge thanks to Andy for the loan of the car to do the event. Not sure he will get it back now.”

Brown now looks towards the second round of the championship, the ORC Canal Rally, at the end of May where he will use the Honda in a bid to get his season back on track.