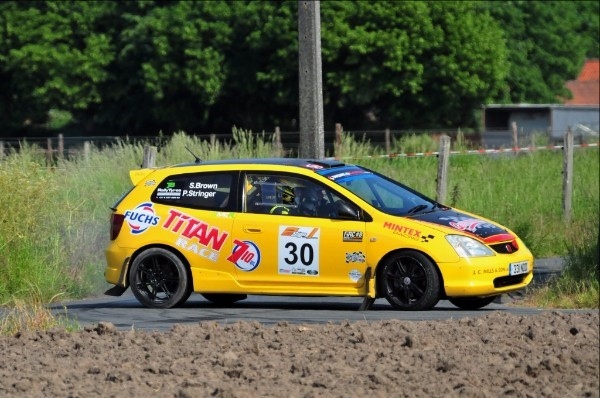 Rochdale rally driver Steve Brown endured a disappointing debut of his new Honda Civic car in Belgium last weekend, with a broken brake pipe forcing him out of the ORC Canal Rally after just the second stage of the event.

Brown had been forced to delay the use of the Honda at the beginning of his Flanders International Rally Challenge campaign due to transmission gremlins at a pre-season test, so was hopeful of a decent result at the second round of the series in his new steed.

Just a few miles into the second test, a burst pipe caused a significant loss of brakes on the Civic and with another stage to go before he could reach service, his rally was over.

Brown had secured a deal to contest the Belgian series in a more powerful Honda Civic for the 2017 season whilst his own familiar Nissan Micra Kit Car undergoes a series of upgrades to allow him to match some of the more powerful cars in the 3F class.

With regular co-driver Paul Stringer alongside, Brown headed to Oostrozebeke in West Flanders hoping for a solid haul of points to assist in their championship aspirations.

After using the short opening stage to acclimatise to his relatively new surroundings, Brown began to settle into the Civic during the second test of the day which was some three times longer than the first, but any chance of a result disappeared a few miles in, along with Brown's brakes and he was forced to retire at the end of the test.

He said: “Im really gutted to end the rally like this, after all the work the team has put in to get us here.

“Everything felt good through stage one and I’d made a conscience effort to build on my pace gradually through the day. But when your foot goes to the floor it’s never a nice feeling and we had no option other than to withdraw to save further damage. I know the potential is there with this car so we will persevere and see how we get on next time out”.

Brown is unable to contest the next round of the series due to other commitments and will now look to the remaining rounds of the series to evaluate his championship aspirations.