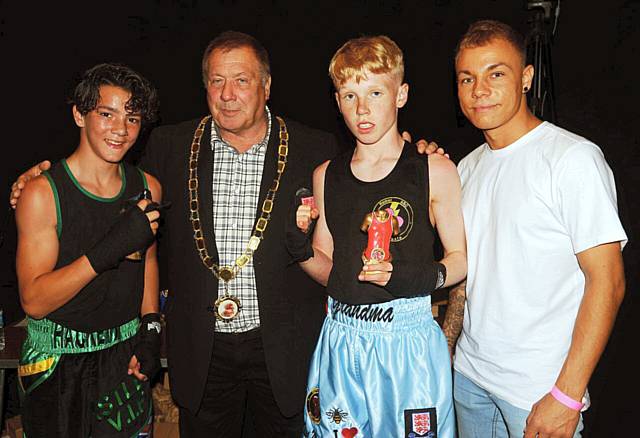 The night started off with a skills bout between Hamer female boxer, 10-year-old Allana Shaw - who put on a terrific performance - and Monae Smith of JR Gym. No decision is given in a skills bout and both girls had their arms raised at the end to the appreciation of the crowd.

Hamer boxer Aeron Maddocks came next and he used intelligent work-rate to out score Baily Hacket, of Astley ABC, by unanimous decision.

The thirteenth and final bout of the evening saw Darren Ried, of Darnhill ABC, beat Lewis Farrelly, of Love Boxing, by unanimous decision.

“I cannot thank enough the numerous people who gave up their time and effort to get this show up and running at such short notice. There are so many I would like to thank, like Brickcroft Social Club who let us use their venue free of charge. The North West boxing officials who also gave up their time free of charge. A big thank you must go out to Gary Dunn of Ringmasters, who let us use his boxing ring free of charge and to All Sport of Sunderland who supplied us free trophies for the boxers.

“A big thank you goes to Manchester celebrity, Callum Harrison, who plays Clayton Hibbs in Coronation Street, who kindly, along with England Boxing Representative Liz Norris, gave up their time to hand out the trophies to the boxers.

“Also, I would like to thank the best MC in the business, Eddie Copeland, who also gave up his time free of charge, and to Patrick Connellan, of Love ABC, who provided free food for all of the boxers and officials.

"A big thank you must go to Stephen Murray who went around the pubs of Rochdale with a bucket collecting well over £100, but he biggest thank you goes to 15-year-old Clayton boxer Curtis Magee who raised an incredible amount of £462 pounds all on his own.

“The boxing season is virtually over for us yet so many clubs and their young boxers managed to make it at such short notice and at a cost to their own pocket and they made it a great night of boxing for the paying public, who also showed great support and respect for all of the boxers, whilst also generously distributing more money from their pockets to help us gain such a fantastic amount of money.

“I have to also thank the girls from Hamer ABC and Clayton ABC who also gave up their time to collect money on the door, served food and sold raffle tickets.

“God bless the victims and survivors of the Manchester atrocity and I hope the money raised helps them in some way.”