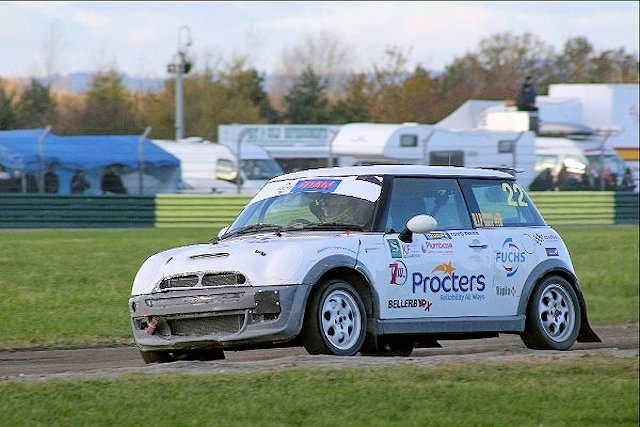 Rochdale rally driver Steve Brown won the ‘C’ final in his inaugural rallycross outing with Bellerby RX Racing Team at the final round of the BTRDA Clubmans Championship at Croft Race Circuit on Sunday (5 November).

Brown, usually found behind the wheel of his Nissan Micra kit car on the Flanders International Rally Challenge (FIRC), drove a Bellerby RX Racing Team BMW Mini at the North East circuit and bagged a pole position slot and a race win on his first race weekend.

The outing, arranged by sponsors 710 Oil and Fuchs Titan Race Oils, saw Brown use the same car that Drew Bellerby took to a second place in the BMW MINI category of the MSA British Rallycross Championship earlier this season.

A mature drive in a hectic race saw Brown take an impressive race win on his debut, to catapult him into the ”B” final. Up against rivals with heavily modified machinery, Brown could not quite make it onto the podium but left the circuit delighted at how his debut had gone.

He said: “What an amazing experience this weekend has been.

“It took a lot of getting used to having others drivers around me to cope with but once I got into the right mind frame I could just concentrate on doing my own thing.

"I guess predictably, I was quite slow off the mark this morning but as the confidence grew my lap times were dropping and I began to find some pace.

"I had perfected the circuit just at the right time and to get a race win on my debut really was a pleasant surprise.

"I was never going to challenge anyone in the B final but the experience was fantastic and I am really pleased to have had a go."

Brown also praised the work of the Bellerby RX Racing Team. He added: “The Mini was excellent to drive, and I have to thank Drew, Paige and Dave Bellerby for trusting me with it for the weekend.

“They offered plenty of advice and encouragement too which helped a lot, those guys really know rallycross.

"Huge thanks must go to 710 Oils and Fuchs Titan Race for this amazing opportunity, I loved every second."