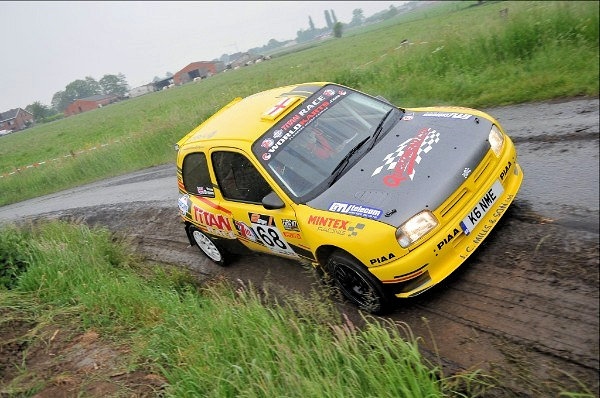 Rochdale rally driver Steve Brown will aim to put the disappointment of last season behind him as he plans to return to the sport with an interesting mix of events and cars for his 2018 campaign.

After a turbulent and rather sporadic year which saw him take to the wheel of a Honda Civic and Mitsubishi Lancer, Brown will embark on an assault on the Flanders International Rally Challenge (FIRC) in his popular Nissan Micra Kit Car, which has undergone a series of development work during 2017.

His season in Belgium will be complemented with selected outings back in the UK, contesting the HRCR Mini Sport Cup, behind the wheel of a Mintex supported classic Mini.

Brown has also been invited to compete in the Rallye Festival Trasmiera with the Micra, which takes place near the Spanish city of Santander.

The 29-year-old sales engineer is well known for his impressive results in the Nissan and has taken several class titles in the National Asphalt Championship and FIRC podium positions. With a desire to further develop the under powered Micra after 2016, Brown was offered the loan of a more powerful Honda Civic but his season was cut short due to mechanical issues. Aside from sporadic outings in the Mitsubishi, a full championship assault has not been forthcoming.

Now, Brown will look to consolidate last year’s misfortunes and ensure he makes the most out of the season ahead.  His first outing will be at the opening round of the FIRC in April, Rallye Salamandre where he will return to the event in which he claimed a class 3F podium in 2017; at the wheel of his old, borrowed Nissan Micra.

After the Rallye Festival Trasmiera, Brown will resume his FIRC championship aspirations at the ORC Canal Rally in May and is keen to get the season underway in the popular Micra Kit Car.

Brown said: “It really felt like I could not do anything right last season and we had some really wicked bad luck.

“I knew I had to develop the Micra Kit Car further but did not want to take a whole year out so was grateful for the support I got from people who loaned me cars to enable me to compete, but we just could not pull it all together and not doing a full championship wasn’t much fun.

"Now the Micra is back on the road I will be heading back to Belgium and see what we can do with chasing down the two-wheel drive and class honours.

"We will mix that with the invitational outing in Spain which I am really looking forward to.

Brown will also try his hand at historic rallying, with selected events in the Questmead owned Mini Cooper starting with the Tour of Flanders in August. He will then make his first UK outing at the Cheviot Rally across Otterburn in the North East at the end of the year in the machine.

He said: “It will be a different animal altogether but thanks to changing cars so much last year I have learnt to adapt to that and I am really looking forward to the close competition in the Mini Cup.

“They are great fun to drive and despite only having two outings, I won't be there just to make up the numbers.

"Historic rallying is certainly very buoyant at the moment so it will be fantastic to be part of that.

"It will be a good mix of events too, both in Belgium and back home so I think it will round off the year nicely. It is going to be a busy one.”