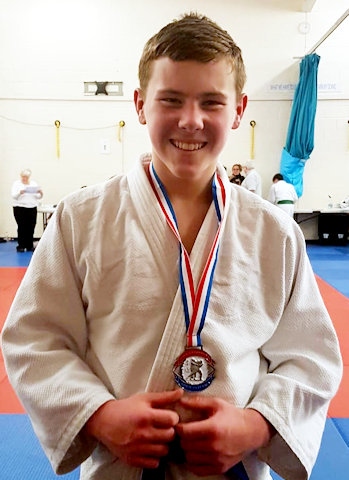 Silver for Jake Brearley at the British Schools’ Judo Championship

After beating three out of four contenders in the British Schools’ Judo Championship, Jake Brearley walked away with a silver medal.

Jake, 12, who trains at Rochdale Judo Club, faced competition from competitors from all over the country and was unlucky not to come away with gold.

He said: “One of the contests was fairly easy, in two I had to work hard and put effort in and the one I lost was against the eventual winner.

“In judo contests there must be a winner and so if it goes to three minutes and the scores are even or no one has scored, the fight continues until someone scores.

“Although the winner had also won three contests and lost one, because he had beaten me he won gold. If it went on points then I would have won.”

Jake fights in the under 60kg category as a pre-cadet and has attended the judo club since he was at primary school.

He said: “I like all different sports and also play football. I have made quite a few friends at judo and learnt a lot of new techniques.”

The Whitworth Community High School Year 7 student earned another silver medal earlier in March at the North West Area green belt and under competition at Newton-le-Willows in Merseyside after he won four out of the five contests he competed in.