Rallying: Mini adventure ends in retirement for Brown in Belgium 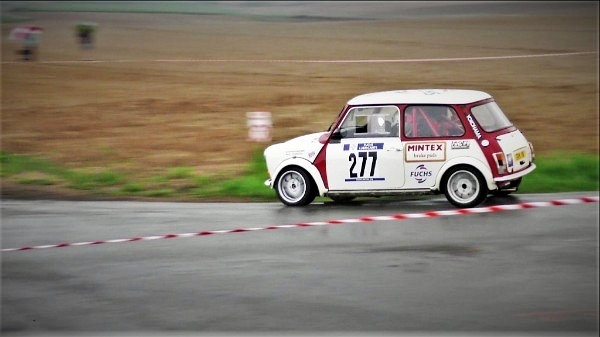 Steve Brown was forced to make a last minute switch to a historic specification Mini Cooper last week, just days ahead of his trip to Rallye Salamandre in Belgium (22 April).

The Rochdale rally driver was due to use the Nissan to kick off his second season in as many years on the Flanders International Rally Challenge (FIRC), but less than a week before he was due to leave, Brown was informed the car would not be ready in time and he was faced with the possibility of not competing at all.

Brown had a backup plan and headed across the channel to compete in the popular event behind the wheel of the classic Mini.

Despite his best efforts on the Belgian closed roads, Brown was forced to retire on the third test with gearbox failure.

The 29-year-old had a sporadic season in 2017 with outings in Belgium and the UK behind the wheel of a Honda Civic and Mitsubishi Evo IX whilst the Micra Kit Car undergoes essential development work which has taken longer than expected. Brown was nevertheless looking forward to the rally having taken third in class on the event last year.

It wasn’t an easy start to event for Brown and co-driver Paul Stringer however. A torrential thunderstorm during the opening stage made the going treacherous for the classic machine, but a failed wiper linkage made matters worse, leaving Brown to tip-toe through the test. Predictably perhaps, steamed windows hampered any progress on the second stage and the third saw the Mini retire from the event with transmission woes.

Brown said: “After all the hard work and last-minute rushing around to get the Mini here, it’s a bitter blow to have only completed three stage.

“Despite the issues it was great fun and the Mini was popular with the spectator that’s for sure. I was just getting into my stride too, it’s a completely different animal to the Nissan but I really enjoyed the stages we did do”.

There will be no rest for the team as they now head for Wales at the weekend to tackle the second round of the HRCR Mini Sport Cup across Epynt Military Ranges at the Dixies Historic Challenge on Sunday (29 April).

Brown said: “It will be a very tight turn around but we think we can get it fixed and back on the road in time.

“I really do enjoy Epynt and we always did pretty well there when we competed in the National Asphalt Championship in the Micra so this will be an awesome experience in the Mini. It’s really great fun to drive and competing against so many other Minis creates a great atmosphere and sight in the service area. It will be a bit slower than I`m used to but I`ll be trying just as hard that’s for sure”.