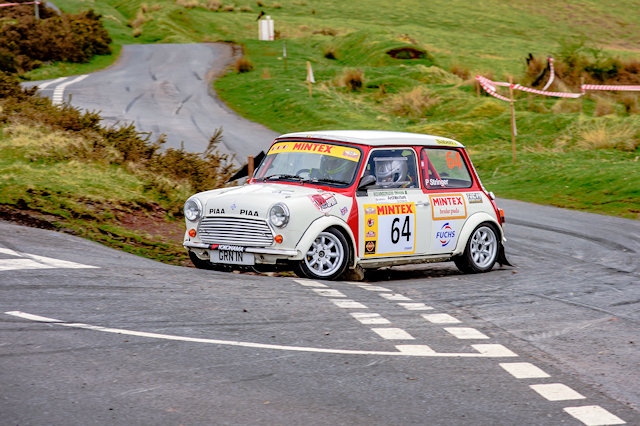 Brown took podium in Wales after his Belgian disappointment

Brown and co-driver Paul Stringer quickly adapted to the classic Mini across the notorious Epynt Military Ranges and secured an impressive second place in class MC4 against many more seasoned competitors in the category.

The historic-specification Min provided a very different viewpoint to the event for Brown, having previously contested events at the venue in his Micra as part of the National Asphalt Championship in 2016. He was not fazed by the change of power, handling and braking, battling hard all day long to take second place in the hotly-contested Mini class.

To add to the weekend, Brown also elected to play his ‘joker card’ meaning his result bags one and half times the points allocated for the championship and he was pleased to finally get a finish for the car.

Brown said: “It’s a totally different beast to drive and I really have had to change my driving style and approach to the whole event.

“To come away from my first full rally in the car with a class podium is really encouraging.

"I will admit I do have a lot more to learn about driving the Mini, I’m pretty sure there are places that I could make up time on my rivals but for now I`m happy to have taken my first rally finish of the season with an award.

"The competition was excellent too and with 20 or so other Mini’s competing in the Cup, the camaraderie was fantastic.”

Brown’s succes comes with perfect timing as the 29-year-old will now prepare to head to Spain to tackle the Rallye Festival Transmiera on 10-12 May.

This time, Brown will be taking the Nissan Kit Car to Europe and is excited at the prospect of competing in the country for the first time. Over 160 cars will be tackling the closed road event in the North East of Spain.

He said: “It’s a real honour to be invited over to tackle the rally and it looks like it’s an amazing event.

“To be honest its very humbling when you see some of the names on the entry list and to line up alongside legends such as Juha Kankkunen is pretty special.

"There will be no heroics from me as the car will still be very fresh but of course we want to put on a show for the crowd and the atmosphere there will be unbeatable. I don’t think I’ve looked forward to a rally so much in ages.”