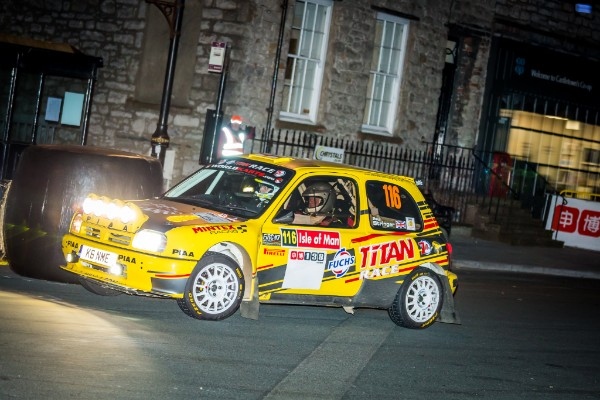 The iconic Nissan Kit Car, driven by Steve Brown is back in action in Belgium this weekend

The striking Nissan Micra kit car of Steve Brown will be heading across the English Channel this week, as the Rochdale driver aims to get valuable points on the board in the Flanders International Rally Challenge (FIRC) at Rally van Wervik (8/9 June).

Brown endured a testing start to his 2018 campaign after the popular Nissan was side-lined just days before the start of Rallye Salamandre earlier in the year, forcing him to revert to a historic specification Mini Cooper for the event. Transmission failure on the third test thwarted his efforts to secure points for his assault on the challenge.

Now, he will finally get to use the potent machine on the closed public roads in Belgium and resume his campaign on the hotly contested class 3F battle. His co-driver will be Paul Stringer.

Despite the Micra not being ready for the start of the season, Brown has still enjoyed success behind the wheel. A podium result in the Mini on the HRCR Mini Sport Cup - Dixies Historic Challenge just a week after his first foray to Belgium in 2018 saw an upturn in fortune for the Questmead Director which was soon followed by a trip to the prestigious Rallye Festival Transmiera in Spain.

The invite-only event marked the first competitive outing for the Nissan Micra Kit Car in over a year as he mothballed the unique model to carry out essential upgrades to the power plant and suspension.

Intermittent outings in 2017 behind the wheel of a Honda Civic and Mitsubishi Evo IX proved to be less fruitful although a podium on his Rallycross debut was a highlight.

The return of the Nissan in Spain ensured that any teething problems are ironed out as he resumes his FIRC assault in Wervik.

Brown said: “The Micra is a great tool for the unique Belgian roads and It will be fantastic to finally get back over there and compete against everyone in the series and sample those stages once again.

“Rallye Festival Transmiera was a perfect shakedown for the car as it was much less competitive than it will be in Belgium and that allowed us to find out what we needed to change for future events. It was the first outing for the car in well over a year so to finish that rally without too many issues is encouraging. It feels awesome to drive so I am hopeful for a decent class result this weekend.

"Thinking back to 2016 when we contested the championship, we had a 100% finishing record and won the two-wheel drive category on the final round, so I know that both the car and I am capable.

“That was a good year for us in the car and that was despite being well down on power compared to other class contenders.

"I will also be looking to make sure we get a good finish after our first-round non-score but either way, it will be a long awaited return back to Belgium with the Micra”.

The event offers around 60 miles of special stages from its Wervik base on 8/9 June.