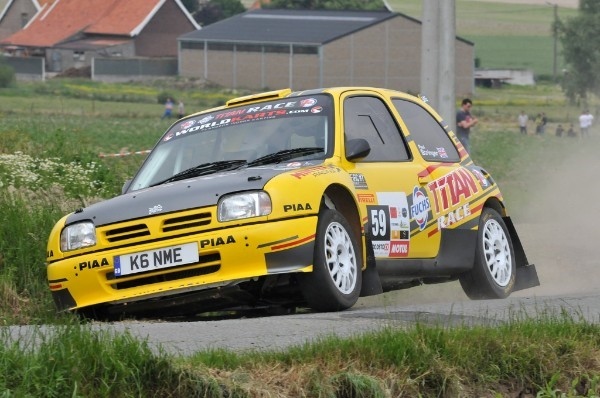 The Rochdale driver made the trip across the English Channel to contest the Flanders International Rally Challenge (FIRC) qualifier in only the second event for the crowd-pleasing machine this season.

With the aim firmly to gain a foothold on the scoreboard after a faltered start in the series, Brown duly delivered and brought the Micra home fourth in the two wheel drive standings to finally get his assault underway. He was partnered by regular co-driver Paul Stringer for the event.

Sporadic outings in the FIRC last season ensured that Brown has never beaten his impressive results during his 2016 campaign, which saw a 100% finishing record, class podiums and an overall two-wheel drive win behind the wheel of the Micra.

This year has also seen a less than ideal start, thanks to delays in the Micra being ready for the first and second rounds, meaning a switch to a historic specification Mini would be his only option to compete in the series.

That ended in retirement, but it did allow the final modifications to be carried out to the kit car before an outing in Spain, at the invite-only Rallye Festival Transmiera in May.

The event marked the 2018 debut for the car after almost 12 months of engine and suspension development and was ideal to shakedown the car due to its non-competitive format.

Brown headed back to Belgium in the Micra for the first time since 2016 for the closed-public road event and it was a welcome return for both him and the Nissan. Despite its earlier Spanish outing, last weekend was the first at full competitive speeds and he would nurse the car through the 12 stages of the event which totalled almost 100km.

As the stages passed, Brown’s confidence increased and after the opening loop, began to creep inside the top ten class positions. Filled with more powerful and modern R2 specification cars, the class is one of the most hotly contested in the event and he kept his cool to finish in eighth from an original 21 starters.

He was elated to reach the finish of the notoriously tricky event.

Brown said at the finish: “It feels really good to be back here in Belgium but more importantly, it feels great to be back with the kit car.

“We came here with the aim of really getting some decent championship points on the board but also to shakedown the car having never really driven it in anger properly. I’m very mindful that we are still in the development phase with it and there is still work to do, but I'm really impressed with the changes we have made so far. I`ll be honest, it wasn’t trouble free but to finish eighth in that class, surrounded by British Championship Juniors with a lot more brake horsepower than us is really encouraging.

"The weekend certainly exceeded my expectations so now we know what we need to do to make the next step with the car and hopefully, we can do that before the next round that I can contest which will now be in August”.