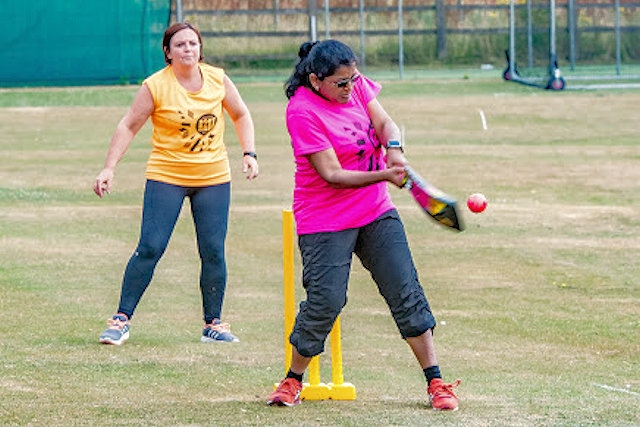 Over 30 women turned up to give cricket ‘a go’ at Milnrow Cricket Club’s Women’s Soft Ball Cricket Festival on Friday.

The festival was supported by the Lancashire Cricket Foundation and Milnrow provided a free glass of prosecco on arrival for all the women, plus a free t-shirt for all who took part.

Julie Durrant, Soft Ball Cricket co-ordinator for the Lancashire Cricket Foundation, said: “The festival was aimed at encouraging new women into cricket and their friends to come along to have a great first experience of the game.

“The games were six-a-side and the rules designed to make the games fun, fast and easy to pick up.  Teams are made up of women who have never played cricket before and are encouraged to make up team names.”

Richard Park, spokesperson at Milnrow Cricket Club, said: “It was great to see so many women turn up and take part.

“We planned the event to ensure women felt supported, relaxed, not judged and could learn new skills in an inclusive atmosphere. We definitely achieved this this weekend.

“Everyone had a great time and cricket was definitely the winner. We are hoping this event will now see more women come to the club and take part in the great game of cricket.”

If you are interested in getting involved in Women’s Soft Ball Cricket in the area, then it isn’t too late to sign up to Heywood Cricket Club’s festival on Friday 20 July.