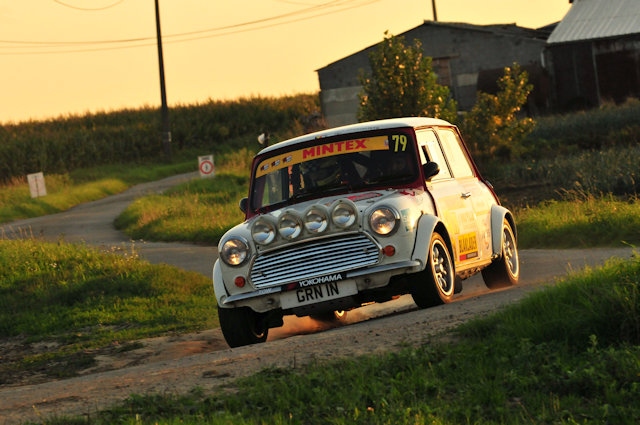 Nissan kit car driver Steve Brown made the switch to his historic specification Mini Cooper at the Conxion Omloop van Vlaanderen Rally a successful one last weekend, by steering the classic car to a class win at the Belgian event.

Despite usually being seen behind the wheel of his unique Nissan, the Rochdale driver took an impressive Open Category victory on only his second overseas event in the Mini.

With regular co-driver Paul Stringer unavailable, Welshman Arwel Jenkins stepped into the co-driver’s seat and the newly formed duo managed to overcome some issues along the way, earning them second Mini home in the HRCR Mini Cup and 43rd overall.

Brown has had a sporadic year of competitive rallying so far, with outings in the Flanders International Rally Challenge (FIRC), mixed with one-off drives in the Mini Cup in the UK.

With his usual Kit-Car unable to make the start of the season in Belgium, Brown found himself using the Mintex backed Mini for Rallye Salamandre in April. That outing ended in retirement with transmission failure, but just days later, the 29-year-old secured a class podium at the Dixies Historic Challenge in Wales.

The Mini hasn’t had an outing in Brown’s hands since then, until he headed back across the English Channel to join the Mini Cup for its overseas event. The rally was split over two days from the event base in Roeselare, with 18 special stages and around 200km of competitive driving ahead. To add another dimension to the rally, three stages were tackled under the cover of darkness on the Friday night.

Settling back into the Mini would understandably take a few stages but Brown guided the Mini throughout the opening leg to end the day in second in the cup standings, a mere two seconds in front of his nearest rival in third.

Saturday provided the longest leg of the event and the first loop of stages did not start well for Brown.

A flapping bonnet was the least of his concerns as the exhaust departed company with the Mini after grounding out on one of the many ditch-lined stages. The unit remained on its mountings enough for Brown to put it in the boot, successfully reattaching the silencer at the service halt.

With his early scare overcome, Brown knuckled down over the remaining stages of the day to bring the Mini home in a class winning position.

He said: “I’m really delighted with this result. “It is a long and tough rally but we overcame our early issues and had a great time.

"This Mini is so very different to the Micra and I do find the pressure is off a little when you drive this car. It just lets me enjoy the stunning roads out here whilst still having that competitiveness with the Mini Cup guys.

"It is only my third rally in the Mini so to beat some ‘old hands’ over here is quite an achievement. Doing the FIRC will have helped of course but it’s certainly made it all worthwhile.

"Thanks must also go to Arwel for stepping into the passenger seat for Paul.