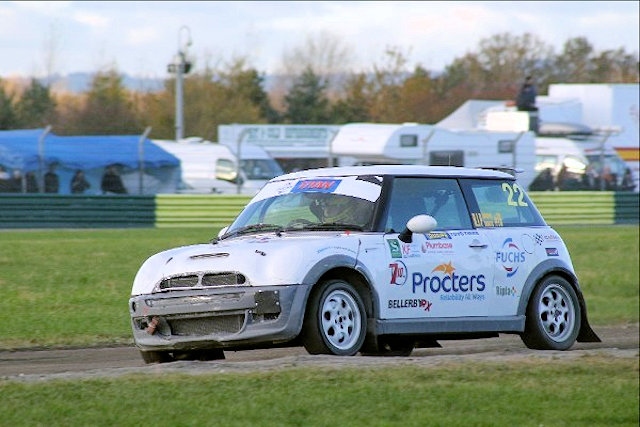 Brown returns to the Bellerby Mini and Rallycross this weekend

Flanders International Rally Challenge contender Steve Brown will make a return to the BTRDA Clubmans Championship at Blyton Park Race Circuit this weekend, 14 October, in a bid to better his 'C Final' win at Croft 2017.

Brown, from Rochdale, will make the switch to the ultra-competitive formula for the second time in his career and will once again drive a Bellerby RX Racing Team BMW Mini, but this time at the Lincolnshire circuit.

Despite usually being found behind the wheel of his Nissan Micra Kit Car on the closed- public road- stages of Belgium, Brown adapted quickly to the formula during his outing last year. Thanks to sponsors Fuchs Lubricants, and 710 Oils, the deal has been repeated and he will be aiming to replicate his previous category success.

A sporadic year behind the wheel has seen Brown combine a FIRC assault in the Micra, with selected outings in a historic specification Mini Cooper in the HRCR Mini Cup. Whilst he will soon be returning to Europe to contest Rallye Hemicuda in the Nissan, Brown has found time in his schedule to return to Rallycross in the Mini usually piloted by Drew Bellerby.

He said: “I really got an appetite for Rallycross after last years outing and when the opportunity came up to do it again, I jumped at the chance.

“The rallies I have done this season have been great, although as ever, I haven’t been out as much as I would like to be. The events in the classic Mini have been fun and competitive and a bit of a contrast to the Nissan which we are still developing on an event-by-event basis. The Micra is getting there now which is encouraging and it will be interesting to see how we get on next week. But for now, my mind is focused on Blyton”.

Thanks to the ongoing support of his sponsors and Bellerby RX, Brown will return to the BTRDA Clubmans series.

He said: “I didn’t expect to be back again this year, so I have to say a huge thanks to Tom Watson, Fuchs, 710 Oils and the Bellerby family for arranging it. I guess quietly I want to go that one step further than last year but unlike rallying, there are several other guys all thinking the same thing and on the track at the same time as you. I will be out there for some fun and it will take a while to learn the track as I haven’t competed there before. If I do well then it’s an added bonus.”