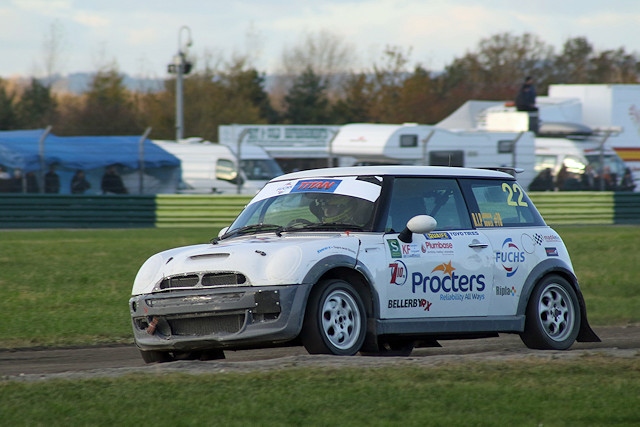 Steve Brown ensured his return to the BTRDA Clubmans Championship was a successful one, by taking third spot in the “B Final” at Blyton Race Circuit on Sunday (14 October) in a Bellerby RX BMW Mini Cooper.

After making his debut in the sport at Croft in 2017, the Rochdale rally driver would once again make the switch from the stages to the circuit in a deal brokered by sponsors 710 Oils and Fuchs Lubricants UK.

He would leave behind his popular Nissan Micra Kit Car and step into a BMW Mini, operated by successful British Rallycross outfit Bellerby RX. Brown was able to overcome the torrential rain and mud strewn circuit to grab a podium result on only his second outing.

Despite the 30-year-old not competing as much as he would like this season, Brown kicked off a busy fortnight with his Blyton outing, dealing with the tricky mixed-surface track and re-acclimatising himself to the Mini.

Monsoon conditions in Lincolnshire greeted the assembled drivers and such was the weather, organisers had elected to streamline the schedule to minimise disruption. The heavy rain would make finding a comfortable pace difficult and in the opening heat of the day, Brown would find himself down in fourth.

Starting the second heat last on the grid, he would have some work to do if he was to make the finals and he duly delivered.

Picking off his rivals one by one, Brown edged his way forwards on the super-fast but tricky circuit to finish second and guaranteeing a place in the “B Final”.

Another less than ideal starting position on the third row meant he would be following in the spray of those ahead, making any chances of an improved result difficult.

An inspired drive saw the Mini driver make his way through the field to third, an impressive result considering the conditions experienced.

“That was fantastic,” beamed Brown after the finals.

He continued: “It was such hard work trying to balance the car and keep an eye on everyone around you whilst deciding when is best to try and make a move.

“There is a lot going on in the car, more than people think but the experience was amazing, even though I couldn’t really see much for most of it. I really enjoyed myself and the Mini is a great car to drive.

“Not sure I'm ready to make the switch to the circuits full-time, but I'd be happy to drive for Bellerby RX anytime. A huge thanks must go to my sponsors and the team for making it happen.”

Brown will now look ahead to this weekend as he swaps the Mini for a Micra and returns to the Flanders International Rally Challenge in Belgium.

Brown added: “I've been looking forward to this weekend for some time and I really want everything to come together in Hemicuda.”

“We think we have the Nissan pretty much sorted now so it will be good to see if the changes perform in competition. We know we are still a little down on power against others in our class, but I enjoy the challenge.”