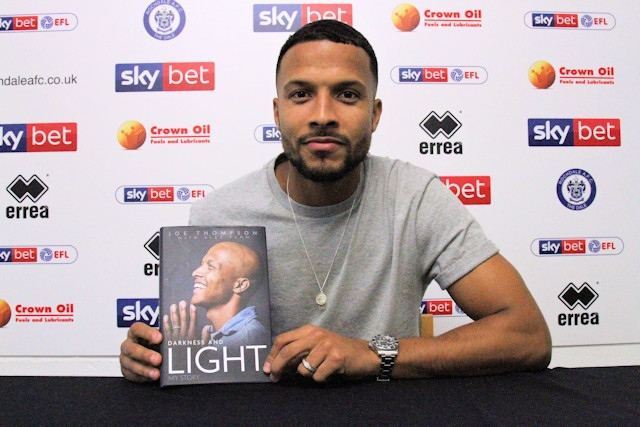 Joe Thompson with his autobiography, 'Darkness and Light: My Story'

Rochdale’s Joe Thompson kicked off the launch of his autobiography with a special book signing at the club on Wednesday (17 October).

Fans had the chance to meet the man himself and have their copies of ‘Darkness and Light: My Story’ signed ahead of its official release on Monday 22 October.

Darkness and Light is the heart-wrenching autobiography of midfielder Joe, a two-time cancer survivor.

Initially diagnosed with nodular sclerosing Hodgkin’s in November 2013 when he was in his early 20s, Joe was given the all-clear after treatment the following June.

Currently out with a hamstring injury, Joe told Rochdale Online the idea for a book came about through his agent, who has since died.

Joe explained: “When he died, I was adamant I would go the whole hog and complete the book he said I should write.

“Fortunately, I was writing notes in case I passed away, so my family could look back at where my mind was and what I was thinking at the time.”

He said: “The hardest part was just getting my head around it because I thought I was so young and healthy. I was put on the children’s ward and I was one of the oldest; I had a child myself.”

Unfortunately, almost three years later, the midfielder discovered his cancer had returned, undergoing further treatment until he declared he was ‘cancer free’ in June last year.

Looking at his tome, Joe, who moved to Rochdale from Bath when he was eight, said: “Mentally, it helped my game; I became more determined.

“It’s nice to hold the book in your hand, knowing your life is in there. It’s cool, but I’m only 29. To have gone through that, I hope I have another two 29s ahead. I could have written two or three books and it’s hard to condense when you’ve had an eventful life.

“I had a turbulent childhood. It wasn’t easy but mum made the best of situation for me and my brother.

“I’m grateful for everything that’s come, and I do have a massive appetite for life.”

He continued: “The hardest part about writing this book was having to talk and be honest with people. I had to visit my father in prison. It was quite draining, but I’d advise anyone to write your story down. I know people will take a lot from it and that it’ll have a positive impact.

“No matter the situation, you can drag yourself out of it and you can get over setbacks.

“Cherish what you have and appreciate your loved ones, because you never know. No-one thinks they’re going to have any setbacks, but I know mine have only made me stronger.”

Joe also cites his wife, Chantelle, and their daughter, Thailula-Lily, as pillars of support.

He added: “Lula’s happy; she wants to take my book to show and tell at school, but I’m not sure how a six-year-old can tell her friends why I looked like that. She can read it when she’s older but she’s just happy to be in it.

The former pupil at St Vincent’s Primary School in Norden and St Cuthbert’s High School, spent six years at Rochdale Football Club in the first team before moving to Tranmere Rovers in 2012.

After defeating cancer for the second time, Joe made an emotional return to play for Rochdale in their FA Cup replay against Tottenham Hotspur at Wembley, realising a dream of playing at the National Stadium – and scoring the goal that meant Dale survived relegation from League One on the final day of the season.

He smiled: “That was a special moment, for anyone associated with football. If you were a fan that day, it was so surreal and unbelievable. I have family who live a mile or so away from ground who said they had never heard anything like it.

“It all came together at the back end of last season with this fairytale ending.”