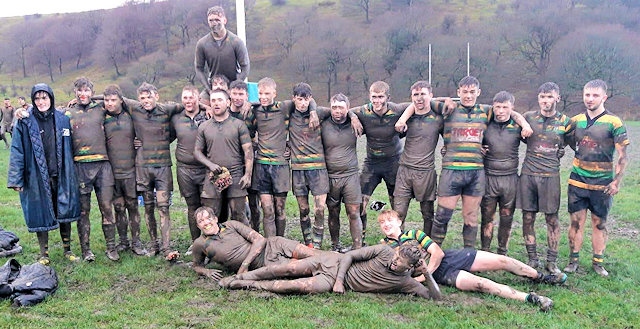 A converted try apiece saw Littleborough hold league leaders Sedgley Park to a seven all draw at a muddy Rakewood.

Littleborough Junior Colts welcomed league leaders Sedgley Park to Rakewood in what has probably been the first weekend of the season where rain has influenced the game.

The home side played up the slope and into the showers in the first half and Sedgley were able to make the conditions play to their advantage opening the scoring following a couple of phases. The visiting hooker managed to squeeze over close to the posts despite the best efforts of David Mills to try and prevent the ball being grounded. Sedgley 10 slotted the conversion to take a seven point lead.

Despite what could’ve been an ominous start for the green army this was the only real pressure they faced for the rest of the game. The majority of play took place in the Sedgley half.

First Charlie Sutcliffe went close in the corner but was adjudged to have been short of the line following slick hands by Ollie Duke. Unfortunately, in the act of attempting to score Sutcliffe injured his shoulder and was unable to continue, being replaced by Isaac Price.

The Littleborough forwards were gaining ground down the middle and the engine room of Harvey Ashworth and Harry Gee were grinding away. Jack Ratcliffe also valiantly looking to break the line but unfortunately for the home side conditions meant the ball was lost in contact to stem any momentum the home side were building.

Another score was then ruled out. Kai Sumner carried hard shrugging off defenders in typical fashion in his new role at six. His burst took Littleborough close and as Brad Watts switched to the blind side and threw a missed pass to Mills it looked as though the powerful eight had opened the home sides account in the corner but the referee adjudged the ball hadn’t been grounded.

As the conditions worsened it was obvious the game was going to be a forward orientated match and fortunately the home side's pack was more dominant. Damion McCormick in at loose head was showing his strength and alongside Ratcliffe and hooker Matty Bradbury the home front row was causing real problems for Sedgley Park. Bradbury even managed to turn two scrums over against the put in.

The platform was created by the pack and Mills made the pressure tell just before half time as he powered over in the corner where he had been denied just minutes earlier. Robbie Nolan and Liam Heap linked well in the build-up and the ball was moved to the number eight who carried a couple of defenders over to score. A fantastic conversion from Jacob Harrison then squared the match as the ball struck the crossbar before creeping over for the extra two points.

As the second half commenced and after another downpour it was beginning to be difficult to tell players from each team apart. This wasn’t a problem for the fresh legs and clean shirt of Ben Stott who immediately made his presence felt as he beat a couple of defenders to break in to the Sedgley half from the kick off. Unfortunately for the damp supporters hugging the touchline, nothing would come of it.

Conditions then took hold and kicking, and scrums came to the fore. Tom Laidler on at full back for the injured Mason Wild was kept busy and dealt with the visiting 10’s probing kicks well both by returning the kick or taking the chance to run when it came.

Harry Law charged down and collected an opposition kick to race 20 metres and found substitute Stott in support. The surprise of the charge down probably meant when Stott was tackled the numbers weren’t there to secure the ball. Another chance missed for the home side.

The next chance came as the increasingly impressive Stott jackaled at the ruck. Heap then kicked the penalty to the Sedgley Park five metre line. From the resulting line-out though Bradbury wasn’t able to find Will Mayoh and the final real chance of snatching a late victory had gone. The game finished all square at seven points apiece

Coming off in a positive but frustrated manner at full time illuminated to the fact that the Boro junior Colts knew chances had been missed and that they had played admirably in the conditions. Again, though they have proved they can more than hold their own following promotion.