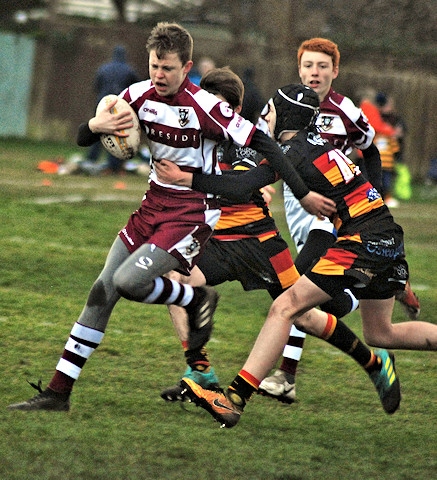 Rochdale travelled to Southport for the Lancashire Junior cup

Rochdale travelled to Southport for the Lancashire Junior cup on the back of some good recent performances stemming from the comfortable win against Blackburn five weeks ago.

They had to play without one of their main ball carriers, Taylor Hartley, who had fractured a thumb in the first 5 minutes the previous week (but played until the end of the game). However, this didn't seem to affect Rochdale as they tore into the opposition from the off.

James O'Connell, Garrett Myers and Chris McConnell all carried strongly, and the set pieces went well. This resulted in Rochdale dominating the first quarter of the game but, frustratingly, they were unable to convert this sustained pressure into points on the scoreboard. This was due to two factors: a break down in some basic skills, namely dropped passes and knocks-ons at crucial moments, but also Southport’s defence which held up under immense pressure and managed to dominate the breakdown when the ball was moved out into the wide channels.

It was probably inevitable then that Southport, having weathered the initial storm, would score on their first visit past the Rochdale 22 metre line and this they did after being given good field position by some sloppy penalties.

Southport consistently got over the gain line eventually getting their free running number eight out wide and over the try line. Rochdale regrouped and again got on the attack. From a scrum taken against the feed, Mitch Holt chipped the oncoming defence and fly-hacked the ball for Jack Taylor to gather and dive between the posts for a converted try.

Rochdale were guilty of not controlling the game now they had taken the lead and after some poor tactical choices compounded by a couple more penalties, Southport scored again from only their second visit into the Rochdale 22.

Possession was fairly even in the second half, but Southport dominated territory and Rochdale only made a few forays into their opponent’s half. The game remained in the balance until the final ten minutes when Southport extended their lead to 10 points after another try, allowing them to see out the remainder of the game in relative comfort.

There was some great work from the line out and the subsequent rolling maul by the Rochdale forwards, moving the ball 30 yards in a fluid, controlled manner. The backs moved the ball well with great interplay and handling.

Again, there were lots of positives; Nick Wright, James Tasker and Josh Clarke all looked good with ball in hand and the scrums and lineouts functioned well.

Things to focus on would be straighter running lines from the backs which would give the forwards a target to support and, for the forwards, a higher work rate to get to more breakdowns.

MOTM went to Nick Wright for strong straight running and good tackling in both the centre and full back positions.