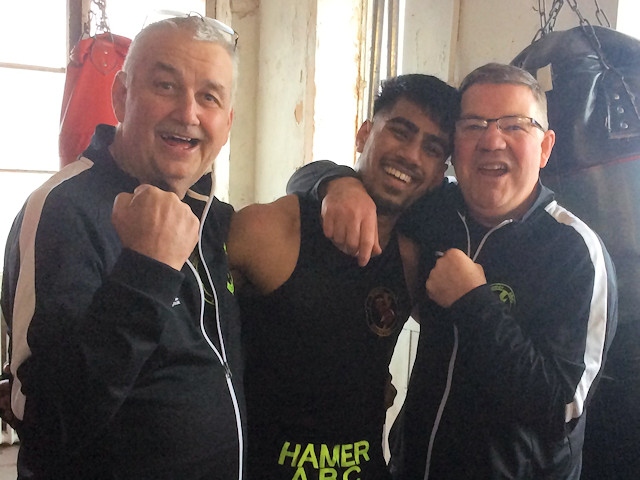 Monir Miah from Hamer Boxing Club with his coaches

On the first bell, the Hamer boxer stepped in to impose himself upon his opponent with a solid right hand, followed by a left hook to the head.

The vastly experienced 27 bout Accrington boxer composed himself and began to find his distance with his long arms and swift footwork, whilst always ready to counter-punch anything Monir tried to land upon him.

Although the Hamer boxer continued to land his punches, Curtis also landed counter punches every time there was an exchange, which gave the impression that he was in control that little bit more.

But as the round progressed, Monir deliberately threw out his jab, whilst hoping Curtis would counter it, and when he did, Monir stepped back slightly out of range before quickly stepping back into the action to land a right-hand punch to the jaw, followed by another left hook to the side of the head.

Curtis continued to wait for the Rochdale lad to throw punches so that he could counter them with his fast hands. However, Monir forced him onto the ropes before faking a movement to the body, only to off load a terrific overhand right to his opponent’s head.

The Hamer boxer immediately thought his opponent was hurt and, due to his inexperience, rushed in to land more punches but was met by a swift one-two combination from Curtis as he stepped in.

It was a great display of boxing from both competitors, which slowly began to develop into a kind of chess match, before Monir forced his opponent into the neutral corner to unload another hurtful right-hand to the head.

It was around this time that Curtis began to hold the Rochdale lad every time Monir got in close to him.

Before the start of round two, Hamer coach Steven Connellan told Monir to stop his rushing-in tactics, which he thought were clearly not working. He suggested that Monir should try and draw Curtis in to lead with his punches first by enticing him with his jab. Then he could off load his right-hand when the Accrington lad moved in.

Although Monir lacked the experience Curtis had within the sport, he clearly had the upper-hand in power and it immediately showed in round two when he landed the same right-hand, left-hook combination on the sound of the bell to start round two.

Monir forced Curtis onto the ropes once again with a double jab before landing yet another solid right-hand to the face.

The Hamer youth showed great maturity when he converted into the counter-puncher by throwing out his jab to entice his opponent to counter-punch him, and when Curtis did, Monir quickly stepped out of range before coming back with more solid counter-punches of his own which continued to land and force the Accrington lad to hold.

The game of chess continued, with both boxers looking to counter punch each other but because the Hamer team believed that they had taken the first round, they advised Monir to wait for his opponent to lead first, which was clearly working when he landed yet another solid right hand to the head, followed by another left hook to the side of the face, which made Curtis hold onto his opponent again.

Incredibly, in the third and last round, Monir landed the same two punch combination as he had at the start of the first two rounds.

The Rochdale lad continued to pick out his jab to entice his opponent to lead and when Curtis tried to answer, he was met by another terrific right hand to the jaw which clearly hurt him.  Monir rushed in to try and land some more punches and both boxers became tangled before the referee stepped in to break them apart.

Both boxers were tired leading up to the final bell, yet it was Monir who continued to try and land punches, whilst all Curtis could do was to hold onto his opponent.

When the bell finally rang it was the Hamer lad who had his hand raised as the new North West Champion by a unanimous decision.