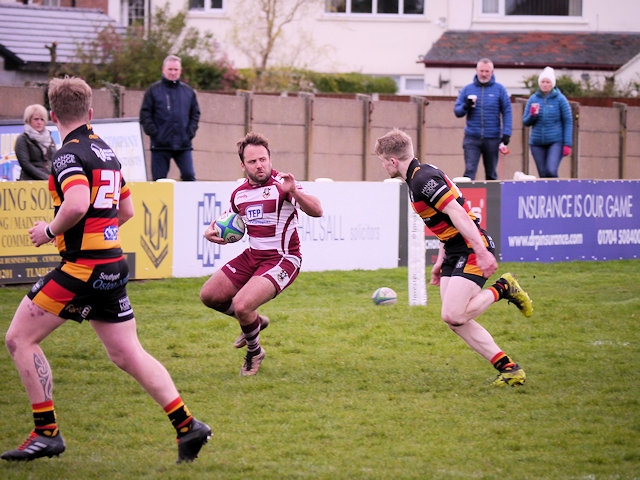 Rochdale Rugby Union Club have moved back to fourth position in the league table after a sound away win at Southport.

Despite several regular first teamers being unavailable Rochdale travelled to a sunny Southport with a side bristling with talent.

The first half was a test for the visitors as Southport threw everything but the kitchen sink at them with 80% of the play in Rochdale’s half and a lot of that in the final 22.

Try as they might Southport could not get close to scoring such was the dogged defence led by Tom Callaghan, Beltus Nonleh and Gui Desousa in the pack and fine catching and return kicking by Jimmy Flitcroft and James Duffy.

The eventful half saw Desousa being yellow carded by the referee and then minutes later, after clearing from their own line, Tom Callaghan received a heavy tackle which dislocated his shoulder he was led from the field for a trip to Southport Infirmary.

Rochdale battled on with sub Ben Coulter in the front row for Callaghan and in a rare foray into the Southport half Rochdale looked strong with the returning Travis Townsend and Duffy linking well, the home side were caught offside and Duffy stepped up to slot home the penalty kick from 30 yards.

From the re-start Southport were given a penalty, almost 40 yards out, which was converted to make it 3-3.

The game had come alive and with Rochdale pressing penalties it gave the visitors lots of ground but not many scoring chances.

Early in the second half Rochdale were moving the ball well and Townsend took a wide pass and was far too quick for the Southport defence, as he crashed in at the corner for Rochdale’s first try, ably converted by Duffy who really had his kicking boots on.

Foster came off replaced by Harry Hayes having put in a good shift in the second row.

A good catch by Blair Henry was returned down the line for a chase by Flitcroft.

A sliced clearance kick saw Rochdale with a line out on Southport's 22-yard-line and Chris Hodgkinson rose up to take the ball for Rochdale and pass out to Duffy. He found Dom Macklin and reversed the pass to Hodgkinson who steamed through the Southport defence for Rochdale’s second try. A difficult touchline conversion by Duffy saw the score advance to 17-3.

The home side needed to score, and they soon found the try line with a good passing move which saw their young winger go over for a nice try, the kick hit the upright and bounced out seeming to sum up Southport’s day 17-8.

With the Rochdale pack winning most encounters, the ball for the backs was plentiful and Jack Green, Townsend and Flitcroft all had good breaks, as the ball crept into the five metre area the defence became more and more desperate and after the fourth offence in as many minutes the referee’s patience ran out and he awarded Rochdale a penalty try.

The scrum encounters became more intense as Southport failed to win even their own put ins and the referee had to intervene after something was said, and Gui Desousa reacted badly, having been yellow carded in the first half he had to be careful, but the referee warned both sides and the game carried on.

Eventually Southport got within kicking range and were awarded a penalty in front of the posts 24-11 with five minutes to go.

Rochdale pressed again looking for the fourth bonus point try and as the ball came wide to Blair Henry, he chipped over the defence only to be cynically flattened by his opposite number, the result was a free kick, but no yellow card.

Rochdale lost the ball at the line out on the home five metre line and Southport hoisted a massive clearance kick, unlucky for them straight to Jimmy Flitcroft who jinked through several tackles and passed wide to the supporting Townsend who was high tackled after he had released his pass, again penalty but no card.

Southport were riding their luck and had a final push up field, in probably their best move of the game, the centre Myers picked up a short inside pass and scored near the posts to make it 24-16 at the final whistle.

Rochdale well deserved winners and on another day could have run in several more tries, James Duffy had a great day with the boot and happily Tom Callaghan was able to join the rest of the team on the bus home.

Next week our visitors are Fleetwood at Moorgate Avenue, 3pm kick off.