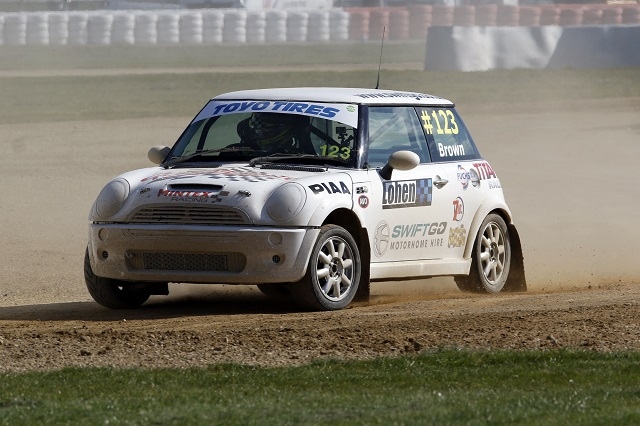 Steve Brown made sure his switch from stage rallying to rallycross in 2019 started on the right foot, by enjoying a successful maiden outing at round one of the Toyo Tyres British Rallycross Championship at Silverstone Race Circuit on Sunday (24 March).

The Rochdale driver took his Bellerby RX Racing Team BMW Mini through three qualifying heats and a semi-final to the final race of the single make championship during the weekend, securing a second place in the semi-final shootout was a highlight and despite losing power and steering in the final, he secured valuable points towards his maiden season in the championship.

Starting in the world of stage rallying, for the past three years Brown has been contesting events in Europe behind the wheel of his familiar Nissan Micra Kit Car. His efforts have recently been rewarded with a class title in the Flanders International Rally Challenge, but a one-off outing in the BTRDA Rallycross Championship in 2017 and 2018 inspired his curiosity and the desire to try alternative motorsports.

With the support of Lohen MINI, Swift GO, Fuchs Lubricants and 710 Oils, Brown struck a deal to contest the entire British Rallycross series alongside Bellerby RX teammate Drew Bellerby, he would contest the ultra-competitive single make formula with eight rounds of the series, kicking off at the Northamptonshire circuit.

Despite his brief outings in a Rallycross MINI previously, the Free Practice session on Sunday morning offered him the first opportunity to get acquainted with his brand-new car. Just three laps were completed but Brown showed no sign of any nerves, setting a lap time good enough for 24th fastest in a total field of 64.

However, the MINI contingent was the focus and with three qualifying heats ahead, Brown needed to keep out of trouble if he was to make the final, with nine other rivals out on track, he also needed to get accustomed to full-on racing after years of battling against the clock.

The rookie took it all in his stride and despite starting at the back of the grid for the opener, he fought through to finish sixth. Whilst the plan was the same for the second, Brown suffered his first off-track excursion during his ‘Joker Lap’ and had to battle hard to recover to take sixth once again.

The semi-final was split into two groups which made the traffic on the circuit a little easier and perhaps more akin to what Brown was used to, indeed, his driving did the talking and he took a superb second place in the semi’s to start the final on the second row of the grid.

His good run was thwarted with a severe lack of power on the way to the line, and the subsequent power steering failure meant it was an uphill battle for the newcomer. He elected to continue and although he completed the race in last place, Brown took away a valuable point haul on his maiden outing.

Brown said: “I don’t think I could have asked for more this weekend and it’s great to get the first one of the season out of the way.

“Coming to such an iconic circuit as Silverstone with the British Championship is a great way to kick off the season and I'm really happy with my progress throughout the weekend. I was still trying to get used to the format, the car and the circuit in such a short space of time so I really had to learn quickly. Thanks to the Bellerby Motorsport team, they guided through the proceedings and once I could settle down, I was really starting to enjoy it.”

He was also happy with his performance at the home of British Motor Racing.

He said: “The MINI is a great little car and the fight within the championship is pretty intense so I’m looking forward to seeing how that pans out during the year. I’m chuffed with my second place in the semi’s and think I could have done well in the final but that’s how it goes sometimes. There is still plenty to learn and I really can’t wait for the next round in a months’ time. I won’t be quite as green so maybe I can push a little harder next time.”

Round two heads to Kent and the Lydden Hill Circuit at the end of April.