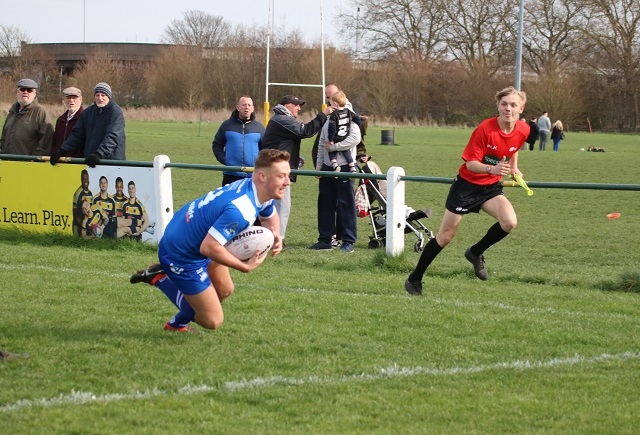 Mayfield travelled west to Hull to face last year’s beaten finalists, and despite the loss, showed spirit and attacking flare to match their opponents and almost come away with at least a shore of the points.

Mayfield started brightly as they took the kick off and charged upfield. Zak Hartley ran the ball strongly at the defence, his support and smart dummy saw him make a half break, and the resultant quick play the ball gave Lewis Sheridan the space to kick deep.

Mayfield chased hard and Sheridan and Hartley got their rewards as they smashed the fullback and Hartley recovered the dropped ball to score under the posts. Hartley converted for 0-6 and a great start.

West Hull tried to hit back and pressed the Mayfield line, but coming out of defence Luke Fowden got away a smart offload to Liam Whalley who drew the defenders and sent john Foy racing down the line.

Foy held his nerve and the next play the ball saw Cole Connolly kick to the left corner where Lewis Butterworth rose above the defence to gather and score – too wide for Hartley to convert.

Mayfield were in control in attack, but defensive penalties started to cost them dear. Two penalties took the hosts to the Mayfield tryline, but it took an offload on the last, that Zak Hartley almost intercepted, to break the resolute Mayfield defence, 4-10 but Mayfield stuck at their attacking structure and Zak Hartley broke through on the left. He raced away and drew the fullback, but the pass just couldn’t be taken by Corey Newsham who had a clear run to the line.

A big let-off for West Hull and Mayfield again conceded back to back penalties to find themselves defending their line. West Hull drove over from two metres out, and despite Mayfield’s good start, it was 10-10 with half an hour gone.

With half time looming Mayfield tried to take advantage of a penalty on the half-way line, but the switch pass went straight into touch and, with assistance from two more penalties the home team found field position to work a break out wide and score an unconverted try for a 14-10 half time lead.

Despite penalties costing them dear, Mayfield had been the better side in the first half, and they continued in that vein, forcing three goal line drop outs from West Hull, who just held their line but couldn’t prevent Cole Connolly from splitting the defence 50 metres out. The young half back dummied through and then bamboozled the fullback to score a magnificent try that Zak Hartley converted to regain the lead at 14-16.

This was a great game between two committed and determined sides and West Hull drew level with another penalty, this time from a 50-50 decision in kickable range.

Mayfield were not satisfied with the draw though and pressed hard for another score. Callum Marriott, Declan Sheridan and Joe Schofield all got over the line without being able to ground the ball and with minutes running out West Hull took advantage of a kind bounce on a last tackle clearing kick to swing the ball wide and squeeze in at the right corner. A touchline conversion took them six in front and they extended it with a drop goal in the dying seconds for a 23-16 victory.

Coach Sam Butterworth has great belief in his charges and, throughout, they showed the honest desire to work for each other and great skill to score some scintillating tries. Mayfield's best players were the ever-probing halves, Zak Hartley and Cole Connolly, Callum Marriott was, as always, strong in defence and Wayne English confident at fullback.

Man of the match deservedly went to Lewis Sheridan for his all action display of attacking and defensive rugby.