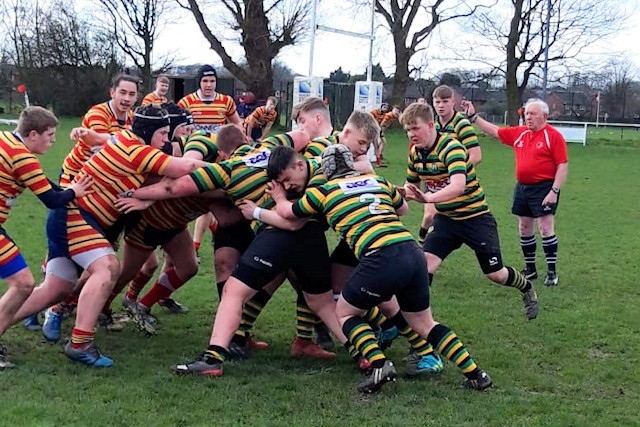 An inspired start to the second half saw Littleborough take an unexpected 19-15 victory away at rivals Bury in the League Cup quarter final.

This was the fourth encounter between the two sides this season with Bury ahead in the head to head with two wins to Boro’s one. In the cup it is all about who can make the most of the chance for a place in the last four.

Littleborough began the game with a dominant spell of possession but were unable to cross the Bury line. The home team were able to repel the attacks and were eventually able to open the scoring with a penalty.

Boro were also awarded a penalty following a high tackle from a Bury defender. Brad Watts stepped up but was unable to convert as blustery conditions meant the scrum half’s kick fell short.

One man who was dealing with the conditions well was hooker Matt Bradbury who was regularly finding Will Mayoh in the lineout, providing a solid platform from which to build. Watts was finding more joy with the ball in hand with some Faf de Klerk style sniping runs and dummies to open up the defence.

The likes of Charlie Holmes, Ben Stott and Nick Mannion were more than willing to run off their scrum half and provide real movement forward, the only matter halting their progress were some passes which were dubiously adjudged forward. Stott came close bustling his way over the line but the Bury fly half was able to prevent the powerful number six grounding the ball.

Once Littleborough got their timing right the pressure was ramped up further. This resulted in two yellow cards for the home side's scrum half and tight head prop for ruck infringements.

With half time approaching and after a number of quick tap penalties, Boro opened their account with Ben Stott using his tactical knowledge to dot down at the base of the post shortly after Matt Rothwell had come close. Watts converted to give Boro a 3-7 lead at the break. 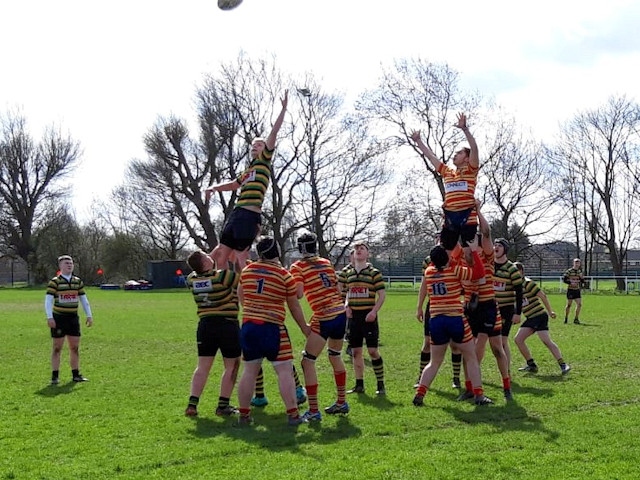 Half time brought about some substitutions and reshuffles in the lineup. Damion McCormick entered the game at loosehead prop and giant second rower Harry Law came in at lock. This allowed Mannion to move out to flanker and the ever dependant Will Mayoh to move to outside centre.

The changes had an immediate impact as early in the second half McCormick put in a trademark big hit resulting in a penalty as Stott was able to jackal the ball carrier. From this Stott took a quick tap and the ball was moved through the hands of Watts to Charlie Sutcliffe who sliced through the home defence beating a handful of defenders to score under the posts. Watts converted and Boro now had an 11 point advantage.

Mannion then made the most of the freedom of playing at flanker as he burst onto a pass from Robbie Nolan to smash his way over for another try. The conversion was missed but with the score at 19-3 Boro were well in command.

Bury did not let the away side have it all their own way and hit back with two tries. A high kick from a penalty swirled in the wind and was allowed to bounce straight into the hands of the Bury winger who placed the ball down out wide. The conversion was missed but another try came following some close drives from the Bury forwards.

The momentum had well and truly swung the way of the home side and Boro needed their leaders to come to the for to prevent a come back. Captain Harry Gee urged for calm and clear heads from his team and they responded.

Boro needed to keep possession to prevent a Bury score. Full back Mason Wild returned a number of kicks with threatening carries and possession was maintained.

With the home side momentum halted Boro held on to secure the win and go through to the League Cup semi final. A date and opposition are yet to be confirmed.

The Boro coaches were happy with the teams performance particularly given the conditions and the way Bury came back. There was some frustration that Bury were given a glimmer of hope by some poor game management and defensive lapses but to get the win away from home is a fantastic result.

Man of the match went to Nick Mannion for his strong carries and brutal defence. Notable mentions too for Bradbury, Stott and Mayoh.