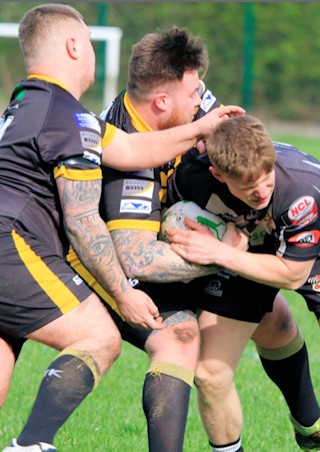 Rochdale Cobras travelled to Saddleworth Rangers on Saturday (23 March) for their second league game of the season looking to continue their good start to the season.

Rochdale started the game slowly and conceded two early tries down both wings. This did not deter Rochdale though as they steadied the ship with some good defending from captain James Mills, Tom Hadley, James Tilly and Chris Lynch leading the line well. Rochdale were unlucky not to capitalise on their strong defending and turn this in to some good attacking play.

At half time Rochdale were 12 - nil down and felt the score should have been closer. After some strong words from coach Ben Bird and captain Mills the team were up for the second half.

The second half started badly for Rochdale as Hadley was sin binned for holding down an opponent for too long. Saddleworth took full advantage of the man advantage and scored a try.

Some poor decisions from the referee meant that Rochdale were soon down to 10 men as two more players were sin binned. Saddleworth took full advantage and scored a further two tries.

Although Rochdale struggled they did pull back two tries. Some great play from Neil Goulden to spread the play out to the left wing, Luke Carr took hold of the ball for Rochdale Cobras first try of the game and gain some much needed confidence. Goulden converted the try.

With Rochdale’s tail up and still only 10 men on the field Rochdale then scored another try with more good play from Goulden down towards the right which found Cameron Cowin who scored Rochdale’s second try of the game.

With all players returning from the sin bin Rochdale went on the offensive to try and catch Saddleworth. This however created gaps which Saddleworth exploited to score their sixth try of the game.

The game was called to an immediate halt soon after this due to a nasty injury to Luke Carr and this brought the game to a slightly premature end as the referee blew for full time with the agreement of both teams.

Rochdale Cobras would like to wish Luke a speedy recover and well wishes. Plenty of support has been received by the club for Luke from far and wide.

Captain James Mills said: “We started slowly against a decent team and due to some refereeing decisions found it difficult to get back in to the game. However there are plenty of positives to take away and apply to our next game at home to Garswood on Saturday.”