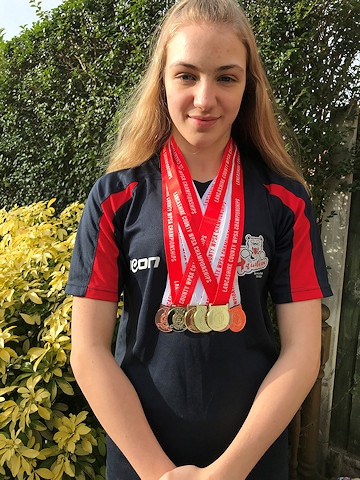 Lucy Cannavan with her medals

Aquabear swimmer Lucy Cannavan, of Alkrington, has qualified for the British Swimming Championships in April.

Her coach, Ryan Manchester, said: “Lucy works very hard in training and this is a fantastic experience for her to swim alongside the current biggest names in swimming.”

The 14-year-old hopes to improve her times, and will be competing in 50m and 200m breaststroke.

She is currently ranked seventh and ninth respectively by age in the two breaststroke distances.

Lucy began swimming at the age of 12, after seeing how much her younger brother enjoyed competing and has gone on to shine in the sport, winning medals in various championships including the ASA North Regional Championships.

Most recently at the 2019 Lancashire County Championships, Lucy landed gold medals in 50 and 100 metres breaststroke, bronze in 50 metres freestyle and 200 metres individual medley, plus awards for both the Junior and the Senior Champion.

The British Swimming Championships are held from 16 - 21 April in Glasgow, attracting the best swimmers from across the British Isles, who are all aiming to be crowned the British Champion.