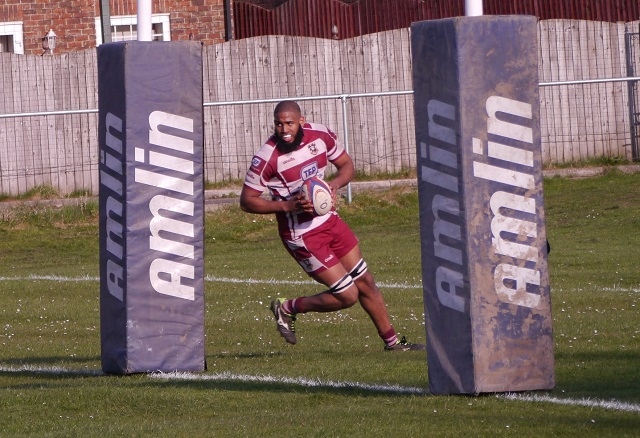 Rochdale RUFC welcomed Fleetwood to Moorgate Avenue on a sunny Saturday afternoon (30 March). After winning 21-0 at Fleetwood earlier in the season, no one expected Rochdale to lose. With almost the strongest side he could field coach Danny Collins told the lads to go out and express themselves and that they did.

With Ollie Coldman returning at full back and Tom Hindle continuing at wing forward only injured Tom Callaghan, Ross Hartley and Jimmy Flitcroft were unavailable.

Fleetwood started with plenty of spirit but Rochdale’s defence were always enough to hold the visitors in midfield and with a series of dropped passes and infringements they played into the home side’s hands and on 15 minutes an interception by Coldman saw him break through to the Fleetwood 22 and give Blair Henry a perfect pass for the winger to race in for the first of the 13 tries the afternoon produced, the kicking was a little wayward so 5-0 it was.

From the deep restart Rochdale had the ball on their 22 with Travis Townsend nipping down the wing only to be bundled into touch on half way. The subsequent Fleetwood line out was not straight so Rochdale got the scrum on half way. The ball came to captain Dom Serridge who jinked through the visitor’s defence to score a fine try and this time the conversion was good 12-0.

Beltus Nonleh took the ball from kick off and battered his way through several tackles only to see his inside pass intercepted by the Fleetwood scum half, he was soon stopped, and the ball recovered.

Next up was Blair Henry taking the last pass of a nice James Duffy move and only just running out of room plus receiving a high tackle for his trouble, the referee allowed play on as Rochdale still had the ball, Townsend engineered another fine move and young Jack Green crossed the line for a great try. The conversion was straight but managed to hit the crossbar and bounce out 17-0.

Five minutes later it was another Nonleh break backed up by Chris Hodgkinson and Travis Townsend that led to a scrum on the visitors five metre line. Serridge took the ball from the back of the scrum and jinked through for a superb second try for him and fourth for Dale. Coldman got the extras so 24-0 after 35 minutes and Rochdale were taking no prisoners. Try as they might Fleetwood could not break into the Rochdale half apart from re-starts after conceding more points.

The bonus points secured, Rochdale went on the rampage and this time the combination of Townsend drawing defenders and slipping a lovely short pass to Coldman to glide in for the try 29-0.

The pack were playing well with Hindle and Foster sweeping up any forward moves by the visitors, one break by the big second row was stopped dead by a massive tackle by Nonleh who along with Gui Desousa were solid in defence as well. Rochdale were soon back in the Fleetwood 22 and it was Coldman linking well again with the centres that were too powerful for the defenders and crashed over for his second and converted as well to make it 36-0.

The re-start saw the visitors attacking up the right side, on half way a scrum down ensued and the referee decided to yellow card prop Ben Coulter for collapsing the scrum.

Half time loomed and coach Collins made changes with Foster coming off and Shaun Needham coming on in the second row. Rochdale kept on going forward winning scrums against the head thanks to hooker Jonny Bradley and great line out work from Hodgkinson and De Sousa. Townsend was always in the thick of the action with Dom Macklin, and Jack Green had the Fleetwood defence in a spin and on the stroke of half time Townsend got the ball wide and managed despite a high tackle to cross the line to make it 41-0.

The second half saw Fleetwood win a penalty on their 22 and from the line out on half way they continued down the left and got a second penalty. They decided not to kick at goal, but tried to go for a try in the corner. The ball was dropped, and Shaun Needham broke away down the middle for Rochdale. The ball came back to Coldman who saw Henry unmarked on the opposite wing and tried a high kick across the pitch, which only just failed to find the winger.

The game ebbed and flowed but Rochdale were always in the diving seat Coldman and Duffy both had good breaks in the opposing 22 but it was prop Harry Hill who finally got over to make it 46-0.

The wingers had a good day and it was Bomber Henry who crossed the line next after a nice passing move from Coldman and Serridge. The final pass left the winger, Henry clear to go in again. The conversion went wide 51-0.

The clock was ticking down and it could not have come sooner for Fleetwood as another Needham charge down the middle saw a rare try for De Sousa following up much to his and the crowds delight, with the conversion it was 58-0.

The ball was taken from the re-start as so often before it was Nonleh who charged through the shattered Fleetwood defence well supported by Foster back on the pitch to score and take the score to 65-0.

The Rochdale line out on the visitors 22 was well taken by Hodgkinson and the move that followed cut through the visitor’s defence with Coldman getting his third try 70-0.

Finally, a good build up and passing move saw Duffy score in the corner and with the conversion leave the final score 77-0.

A very one-sided affair but Fleetwood battled to the end and enjoyed the Rochdale hospitality after the game in the spirit of match.

Next week Rochdale travel to Tarleton for their last away game of the season.