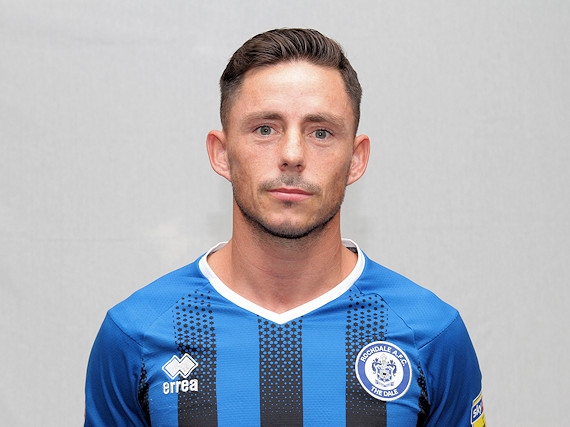 Rochdale battled hard to earn a point at Gillingham as Ian Henderson netted his 18th goal of the season. The Dale captain slotted in from close range after Kgosi Ntlhe beat his marker from a Joe Bunney free kick.

Mark Byrne crashed a shot off the crossbar as the Gill’s ramped up the pressure before the interval with Byrne netting the equaliser deep into first half stoppage time when he headed in a Tom Eaves cross. Graham Burke should have won it for the home side early in the second half when he was left unmarked but fired horribly over from 6 yards out.

After the magnificent win against fellow strugglers Scunthorpe last weekend, caretaker manager Brian Barry-Murphy made just one change to his starting line-up; fit again Josh Lillis returned in goal with Andy Lonergan returning to parent club Middlesbrough after his emergency loan was ended.

Having won two and drawn one of the previous three games he’d been in charge for, Barry-Murphy took charge of his first away game at a ground Dale had won once at in over 25 years.

The first half lacked any real quality and  about the only things to happen in a largely poor game was that both sides had a shot apiece off target. That soon changed when Henderson edged Dale in front. A free-kick from the left was whipped in by Bunney and when Ntlhe stole ahead of his marker, the defender touched the ball to Dale’s leading scorer who made no mistake from 7 yards out.

Gillingham upped a gear as the half came towards its conclusion. Mark Byrne’s jinking run into the area created space; his shot beat Lillis but hit the face of the crossbar with Dale able to clear.

The danger wasn’t over for long and when Dale cleared a Gillingham corner away deep into stoppage time, all eyes were on the referee. With the whistle not forthcoming, a right wing cross was headed out towards striker Tom Eaves on the left wing and when he sent a teasing ball back into the mix, 5’9” Byrne rose highest to head the ball past Lillis.

The home side knew a win this afternoon would virtually see them safe for another season. They started the second half strong and should have gone in front five minutes after the re-start. The tricky Leonardo Da Silva Lopes, on loan from Wigan Athletic, sent a dangerous ball towards the back post and with virtually an open goal, Graham Burke somehow fired over from six yards out on the slide.

The visitors had chances of their own as the second half wore on. Ollie Rathbone tested Tomas Holy in the Gillingham goal with a speculative effort from distance whilst the Czech Republic national got down well to turn Done's rather scuffed shot around the post.

Jimmy Keohane came on to replace Henderson and had a half chance to take maximum points for his side but the Irishman rather rushed a first time shot from outside the area when more composure was needed.

Tom Eaves almost won it for the home side with a spectacular angled volley that flashed across the face of goal and wide as both sides had to settle for a point.