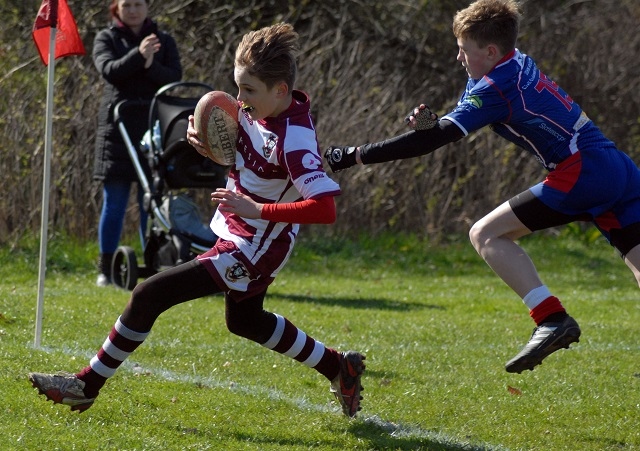 Rochdale RUFC U14s welcomed Blackburn U14s to Moorgate Avenue for their third meeting of the season, with the honours even, with one win apiece so far, it was bound to be another close affair and so it proved.

Rochdale were on the defensive straight from the kick off but an errant pass in mid field allowed Matt Dearden, the Rochdale right wing, to scoop up the ball and out-flank the defence to open the scoring. With strong, swirling winds it was never going to be a kicking game and Mitchell Holt's gallant conversion attempt from out wide, slipped just passed the post.

Blackburn bounced back with a 60 metre try from one of their powerful running backs to score under the posts and take the lead 7-5. The rest of the first half saw both teams defence hold tight with the game being played between the 22-metre lines.

Rochdale began to assert some authority in the second half with a combination of strong forward play and swift handling in the backs. This, in conjunction with some Blackburn indiscipline, saw Rochdale convert one of their chances with the ball moved swiftly to the right wing where Zak Baker touched down in the corner, retaking the lead 10-7.

It was proving difficult now for Blackburn to get out of their own half playing into a strong breeze. The game ended with another sweeping Rochdale backs move with Will Simmons the scorer this time and the final score 15-7.

Special mention to Ben Kershaw for a 'live wire' performance on the wing.

Man of the Match was split between Nick Wright, for strong ball carrying and cover tackling, and Ollie Simpson for catching and returning the high kicks from fullback, with some excellent tackling for good measure. It was another super team performance with the whole squad contributing.