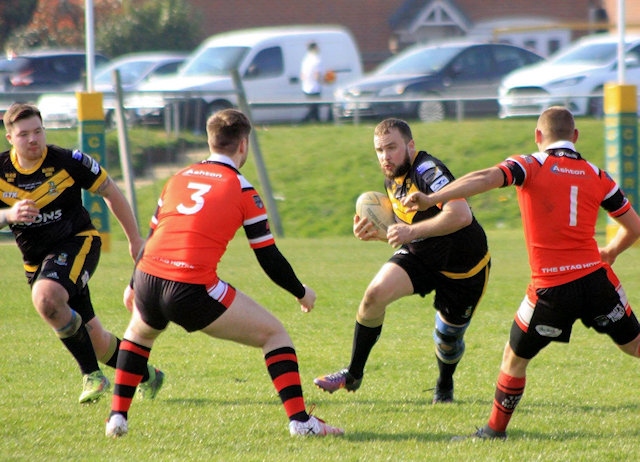 Rochdale Cobras took on Garswood Stags on Saturday 30 March. Rochdale were looking put the defeat in their last game behind them.

Rochdale started brightly and charged upfield to make a point to Garswood who were unbeaten.

Rochdale scored an early try thanks to some good moves from Neil Golden, Kane Morgan, Todd Whittle and Jordan Turner. Turner scored Rochdale's first try with some good foot work to get past the defence of Garswood and Goulden converted the try. Garswood tried to hit back but Rochdale’s defence stood firm, some stand out tackling from James Percy, Jason Rigby helped hold the line.

As the game wore on tiredness set in to the Rochdale team and they had no substitutes due to a team illness. As Garswood brought on fresher players the game started to turn their way. The half time whistle came with Rochdale down by six points.

Half time seem to help Garswood and they came out of the blocks in the second half to attack Rochdale.

This unsettled Rochdale and Garswood built up their lead with two further tries.

The Rochdale players were not detered as they steadied the ship with some good defending and some good play from Cameron Cowin, Chris Lightfoot and Whittle.

During the next play Whittle ran through Garswoods players like a knife through butter and scored a try he richly deserved, Goulden converted the try.

With Rochdale tiring they couldn’t find the energy to keep Garswood at bay, as the full-time whistle blew Garswood scored one last try to rub salt in to Rochdale wounds.

Coach Ben Bird said after the game: “We did what we practiced in training and for the first 20 minutes we controlled the game.

“Tiredness set in, some mistakes crept in and we fell away, which is frustrating, as this team on another day would beat Garswood.

“We’ve got a week off before our next game, so we’ll be looking to build on the good start to the game we had here.”

Man of the match went to Cameron Cowin.

Rochdale’s next game is away to Blackpool Scorpions.