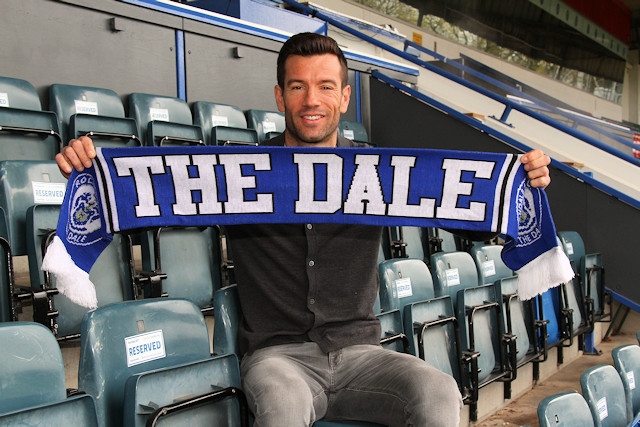 Barry-Murphy has taken charge of first team affairs since the departure of Keith Hill and Chris Beech last month, securing an impressive eight points from an available 12 whilst at the helm, with the team having won two and drawn two under his stewardship.

The 40-year-old, who initially joined Rochdale as a player, has been at the Club since 2010, and has been part of the coaching staff since the 2013/14 season.

He will continue to be aided by Lee Riley, while Tony Ellis will remain in his dual role of Academy Manager and First Team Matchday Observational Coach. Steve Collis, Callum Jones, Ross Jones and Andy Thorpe remain a strong part of Barry-Murphy’s backroom staff.

Barry-Murphy commented: “I had an idea that I wanted to go into coaching, but I had no idea to what capacity.

“From the first day I took over training I felt comfortable. I feel like I really know the club and can understand the players well and how they feel because I've been in their shoes.

“I’m not changing anything. Sometimes, you just can’t control a loss. I want the team to enjoy playing football and not be obsessed with the idea of winning, and afraid of losing.

”I’m still very passionate about the Academy and it’s important for supporters to know that these players will still be given a chance at first team level.

“I think this is the right move for the club, for myself, for the players and for supporters to do this now, so I’m very happy.”

Chief Executive of the club, David Bottomley, said: “It became very quickly apparent that Brian was the right man for the job from what he was doing with the team.

“He brings a lot of a new thinking to the environment and in the last few weeks, we’ve seen a real positivity in the way the team have played.

“Brian will not be operating with a traditional assistant manager; we want to invest more in the coaching side of the club and Brian is as supportive of this as we are.

“We want to continue our 112-year history remaining solvent, and maintain our high level in English football. People forget that League One is the fifth largest football league in the whole of Europe, and we’re very proud that we are playing at this level.”

Chairman Andrew Kilpatrick commented: “Brian Barry-Murphy is, without doubt, the right person to take Rochdale forward. He is young, hungry for success and extremely talented.

“Brian is held in the highest regard by everyone at RAFC and in the wider football business.

“As a club, we have been overwhelmed by the number of calls that we have received from people within the industry who have had nothing but the highest praise for him.

“As has been apparent from his four games in temporary charge, the squad are fully behind Brian and this has been fully reflected in their commitment and performance on the pitch.

“This appointment is singularly well-merited and, we hope, ushers in a new and exciting chapter for Rochdale AFC.

“We have seven vital games remaining this season. I hope that everyone will get behind Brian and the team, giving them our full support for the rest of the campaign and beyond.”

Rochdale AFC will play their next fixture at home this weekend, Saturday 6 April, against Sunderland.