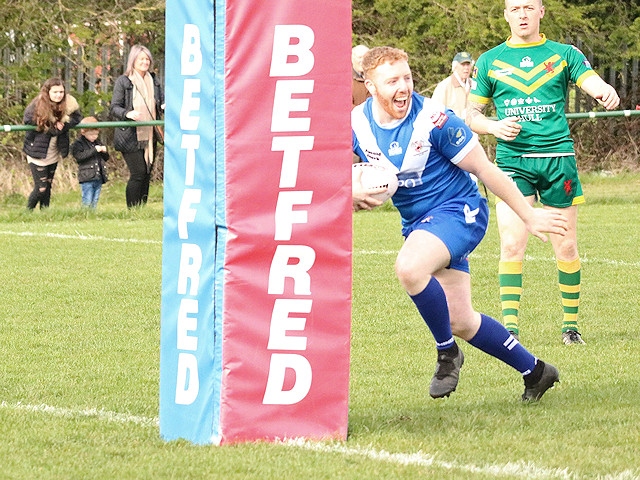 Cole Connolly hopes to be on the scoresheet again

This will be Mayfield’s first home game of the season after their extended away run in the Challenge cup. The cup run means that Mayfield have only played two league fixtures both away from home.

Their record is won one lost one, although they were unlucky to go down at West Hull.

Miners have played four and recorded their first win last week against Underbank 32 - 20. This is a game that Mayfield really want to win and show their credentials for the season.

With no game last week, coaches Sam Butterworth and Steve Wood had the lads in for extra training and they were pleased with the response.

Butterworth said: “With no game last week, we go into this game cold but on the other hand, we have had two weeks to prepare for the challenge, and that's the way we like to see it. We are chomping at the bit to get on the field and play rugby.

“Despite their position, Miners are a class outfit and will certainly be coming here to cause an upset. We are ready for that and are determined that we will perform well and take the points.

“We will be missing Liam Whalley today as he serves a one match suspension, but we have a good enough squad to fill the gap. It will be a tough ask when selecting the 17, but that’s the way we like it.”

Mayfield will expect the pack to set the pace early on with Aidan Gleeson, Callum Marriott Jimmy Connaughton and Shaun Hurley all in top form.

Once the foundations are laid, the likes of Zac Hartley, John Foy, Lewis Butterworth and the Sheridan brothers will look to exploit the gaps in the Miners’ defence, which is currently conceding an average of 26 points per game.

A good win today could set the platform for the season and show Mayfield’s determination to be reaching the play-off spots even at this early stage.