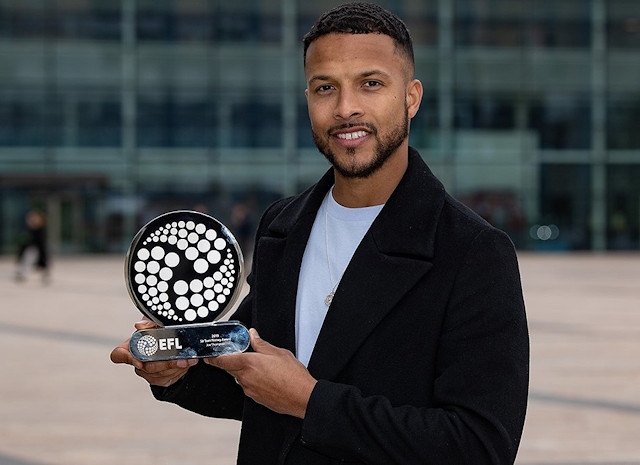 Former Rochdale midfielder Joe Thompson is to be honoured with the prestigious Sir Tom Finney Award at the 2019 EFL Awards on Sunday (7 April).

Thompson’s accolade comes 12 years after being named the EFL Apprentice of the Year in 2006/07 as a youngster.

Thompson made over 250 appearances in a 13-year career, of which nearly 200 were for Rochdale AFC, and proved to be an inspiration to a much wider audience than just simply football after bravely battling, and overcoming, cancer on two occasions.

A story that resonated with the nation, the 30-year old sadly announced that he would be hanging up his playing boots midway through the 2018/19 campaign – just months after scoring one of Rochdale’s most famous goals to save the Club from relegation at the end of last season.

Having battled back from Hodgkin lymphoma cancer, Thompson etched himself into Rochdale folklore. It was a truly breath-taking and heart-wrenching journey, with an almost fairy-tale ending.

The Sir Tom Finney Award is presented to a player who has had an outstanding career and contributed an exceptional amount to the EFL and football in general, something that Thompson can certainly lay claim to doing.

The Award, renamed in honour of the Preston and England legend following his death in 2014, recognises Thompson’s talent, commitment and model professionalism throughout his career, as well as his inspirational story, which has been exemplary to all those involved within the sport.

Upon being told of his success, Thompson said: “To win this award is amazing. When I got told the other day I was doing a dance around the kitchen.

“I feel like my next chapter in life is going to be bigger than my football career. I am going to help people, and use what I’ve experienced to benefit others. To be recognised for what I’ve contributed to football and the league in particular is incredible – it is truly humbling.”

During his first spell at Rochdale, Thompson was an integral part of the side that achieved promotion from League Two to League One, Dale’s first promotion in 41 years, making 40 appearances in total and scoring on eight occasions.

After battling back from his initial diagnosis in 2013, whilst on the books of Tranmere Rovers, Thompson rebuilt his professional career despite the toll taken on his body from the treatment. Firing on all cylinders and back at Rochdale, Thompson was yet again cruelly dealt a further blow, with the cancer returning three years later.

Upon learning of the devastating news, Thompson said: “When you have a terrible illness like that, it affects you, and it affected me massively. I was unable to get through training, I was struggling with all the symptoms you expect with cancer.

“I was 23, had a little girl and the perfect family in a way – I just didn’t see it coming. Before learning of it, everything felt so fast in games, and I just couldn’t keep up and didn’t understand why this was happening. Everything was passing me by, it is a feeling that is so hard to describe, but it affects you in every way.

“Naively when finding out about the illness I asked ‘what does this mean for my football career?’. After a six-month chemotherapy treatment schedule I thought I’d be back on the pitch for the end of the season, it was at that point the doctor simply said, ‘No, young man, your football career could be over and you need to focus on your life’… It was hard to hear.”

After overcoming the illness for a second time, the fairy-tale ending awaited as Thompson etched his name in the clubs history books. With Rochdale needing a win to maintain their League One status, he was introduced to the game in the final 20 minutes.

“The manager said to me, the stage was set and we have to win. I actually said leave it with me, but I didn’t think it would come so quick. I shifted it onto my left foot and gave it everything. It was amazing, it was incredible.

“I understood in that moment the power of football and why so many youngsters dream of getting to that stage. Seeing my teammates running over, the jubilation on the fans’ faces.

“I was thinking I’ve done it, this moment is massive. It is massive for league football, for anybody suffering with cancer and for everybody associated with the Club. It is something I will never forget, and I can’t thank everybody who helped me get to that stage enough.”

The EFL Awards take place on Sunday 7 April at the Grosvenor House Hotel on Park Lane, when winners from across all three divisions will be recognised for their achievements, both on and off the pitch, including the announcement of the Sky Bet Player of the Season for the Sky Bet Championship, League One and League Two.