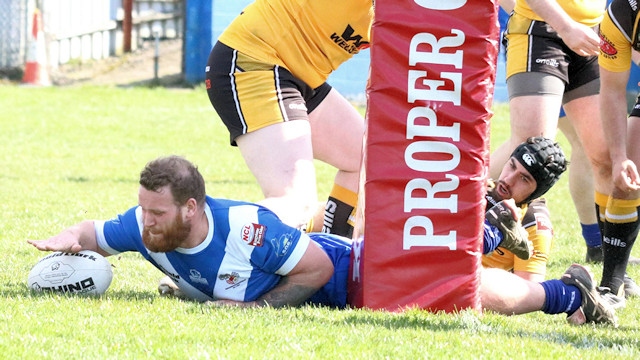 Mayfield finally played their first home game of the season on Saturday (6 April), and despite sharing the spoils, it felt like a point lost, rather than one won. Mayfield started brightly and the mercurial Wayne English – magnificent at full back all day, ghosted in for a try after 10 minutes that Zac Hartley converted for 6-0.

The visitors hit back to level the score, but Mayfield continue to play controlled rugby and on 25 minutes a wide play saw John Foy score in the corner – too wide for Hartley to convert.

Mayfield extended the lead almost immediately with a try from Aidy Gleeson and Hartley converted to take the score to 16-6. Mayfield were in control and cruising.

With the half time whistle looming Leigh Miners pressed the Mayfield try line, but Declan Sheridan took an intercept and, to the jubilation of the large crowd, raced the length of the field to score a try. The conversion was missed leaving the score at 20-6 at half time and Mayfield were well in control of the game. Leigh were hard to find a way back into the game.

It seemed it would be more of the same in the second half as man of the match Lewis Sheridan scored early and Zac Hartley converted to take the score to 26-6, but mistakes and poor discipline began to creep into the Mayfield game.

Munya Samanyana had two acrobatically finished tries disallowed - tries that with the benefit of ‘Super League type’ video review would have been allowed and indeed replayed time and time again for their athleticism and wonder - but the call was ‘no-try’ and whilst Mayfield allowed this to knock them off their stride, Leigh took heart and hit back strong.

The visitors scored 20 unanswered points to level at 20 all with seconds remaining. Both teams had shots at drop-goals to win the game, but with neither successful the points were shared.

Mayfield's best players were Wayne English and Lewis Sheridan, whilst Zac Baker's hard work in the pack did not go unnoticed by the match sponsors RMO Ltd Electrical Wholesalers and Anthony Murphy and Sons.