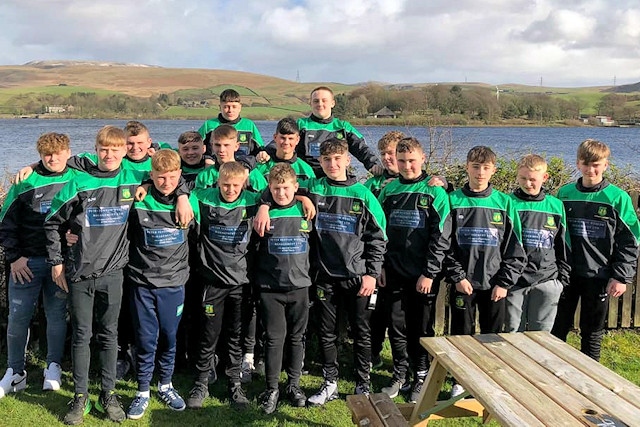 After beating Preston Grasshoppers (B) in the quarter final of the Vase, Littleborough under 14’s were rewarded with a home semi-final against Bury RUFC.  Neither of these teams have met this season, but if last season’s encounters were anything to go by, it would be a tough test for the lads.

Boro started the game well and the early signs were promising, but after turning over the ball to Bury they were swiftly punished when the Bury centre crashed through the Boro defence to score the opening try of the game. The conversion was missed.

The lads reacted tremendously well to this early setback and soon got themselves back into the game when Jake Coupe was able to crash over the Bury line, after receiving the ball deep in the Bury half following a penalty decision. The conversion was scored by Jacob Brady.

Within a matter of minutes, the home side were again on the attack and once more breached the Bury defence when Max Risby crashed over the Bury line. Jacob Brady again slotted over the conversion.

These two quick scores seemed to have a negative effect on Bury and the boys in black, green and yellow dominated the remainder of the half with their forward pack. The pressure that was being applied by the home side led to a further two tries being scored, courtesy of Ben Crabtree and Olly Mills. Jacob Brady converted one of these tries.

At the sound of the half-time whistle the score was 26-5. Littleborough were unlucky not to be further ahead as it seemed certain Ben Crabtree would score another try, but he was held up over the line after a superb last-ditch tackle from a visiting defender.

The fear coming into the second half was whether the lads could maintain their focus and their intensity, and not allow their opponents back into the game. These fears seemed to be allayed when Ben Willocks received a pass deep in the Bury half and beat the Bury defenders to score the opening try of the second half. The try was converted by Jacob Brady.

The lead was further increased when Olly Mills intercepted a Bury pass in open play and ran in a further try (converted by Ben Willocks).  The score-line now read 40-5.

It seemed that the job was done, and either through the lads thinking the same and losing some intensity or Bury gritting their teeth and showing their spirit, or a combination of both, Littleborough U14s were punished during a 10-minute spell in which Bury ran in three converted tries to reduce the deficit to 40-26.

The home side regained focus and after some composed play through the forwards, Brad Chrimes was given time and space to breach the Bury line. Ben Willocks converted to extend the lead to 47-26. This score effectively put the game to bed, and Boro ended the game when Jake Coupe scored with the last play of the game.

The game ended with the score reading 52-26, and bar the 10-minute spell in the middle of the second half, the home side played exceptionally well, and were well deserving of the victory. Their opponents, Bury made it a very enjoyable game to watch, and should be commended for their attitude and commitment throughout.

Boro will now play Sedgley Park in the final of the Vase, and which is to be played at Aldwinians RUFC on 14 April 2019.

Clubman of the week award was awarded to Jake Coupe for leading from the front, especially during the sticky patch.