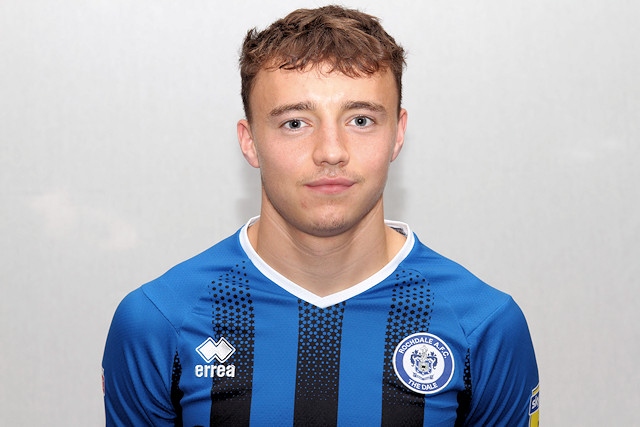 Oliver Rathbone scored the only goal of the game as Rochdale edged near neighbours Accrington Stanley in a tense game at the Wham Stadium. The former Manchester United academy player rifled into the roof of the net from 18 yards out to move his side out of the bottom four for the first time since February.

With both sides firmly in a relegation battle, this Lancashire derby had added bite to it as a win for either side would help their fight whilst defeat could have spelled disaster. Defeat to Sunderland at the weekend meant Dale came into this game in hand knowing a win would see them climb out of the bottom four whilst Stanley had only managed two wins since the turn of the year.

In windy conditions, the game was a scrappy affair with little goalmouth action; both goalkeepers having one save to make each in the opening 45 minutes.

Former Dale loanee Sean McConville tested Lillis with a shot from distance that the Dale keeper could only parry before Luke Armstrong headed the loose ball wide as Stanley looked to edge In front.

At the other end, a swift Dale move saw Henderson lay the ball on for McLaughlin who’s low drive was brilliantly tipped away by Evtimov in the Stanley goal.

The game threatened to boil over when Accrington coach John Doolan stopped Dale captain Ian Henderson from taking a quick throw in which angered the Dale man. A fracas ensued involving both benches and players; in the end both Henderson and Doolan were booked for their involvements.

Brian Barry-Murphy made a change at the break; Jimmy Keohane was replaced by Ethan Hamilton as the on loan Manchester United man looked to add a little more bite into the midfield.

The visitors were certainly brighter in the second half and had a couple of half chances through Rathbone and Ntlhe; both wayward with their shooting.

The only goal of the game came with just short of twenty minutes left on the clock.

Some brilliant hold-up play from Wilbraham created the space to lay the ball off for Rathbone who lashed in a shot from 18 yards out to send almost 1,000 visiting Dale fans into a frenzy.

Stanley piled on the pressure as the game wore on. Substitute Sam Foley saw a goalbound shot deflect wide of the mark whilst from the corner, Ethan Ebanks-Landell had to clear off the line as the home side looked to draw level.

Manager John Coleman pushed central defender Ross Sykes up front in a bid to get back into the game and the 20 year old very nearly did just that. The former Southport loanee rose highest to meet a McConville corner; his header flashing narrowly wide.

Despite a lot of late pressure, Dale held firm for an important three points and with a long trip to Portsmouth at the weekend, Barry-Murphy and his backroom staff will be looking to continue the mini revival on the South coast.