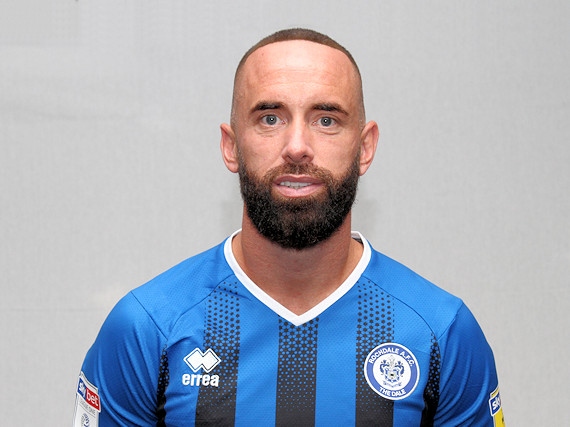 Rochdale crashed to a heavy defeat at the hands of promotion hopefuls Portsmouth as Kenny Jackett’s side kept the pressure on the teams at the top. The South coast club went in at the half-time interval 2-0 up thanks to a headed goal from Oli Hawkins and a penalty from veteran striker Brett Pitman.

Aaron Wilbraham gave Dale a sniff early in the second half when he slotted in after a swift Rochdale attack. Portsmouth soon regained their two goal advantage; substitute Gareth Evans heading in from close range before the dangerous Jamal Lowe finished the scoring after rounding Josh Lillis to slot in. Defeat leaves Dale a point outside the drop zone with four games left to play.

After victory in midweek against Accrington, Dale manager Brian Barry-Murphy made two changes to his starting line-up. Kgosi Ntlhe wasn’t risked after the defender was feeling the effects of his recent run in the side whilst Ethan Hamilton was preferred to Jimmy Keohane who dropped to the bench.

The home side were quickly on the front foot as they looked to make it 5 straight wins in the league. Lowe hit a snap shot over the bar whilst Pitman drilled a free-kick off target.

Ian Henderson had a good chance to open the scoring for the visitors; his glancing header going the wrong side of the upright.

Pompey took the lead in the 21st minute, Lowe beating Bunney down the right with his cross perfect for Hawkins to head past Lillis at the near post.

Lillis had to be alert to beat away a powerful shot from Lowe whilst at the other end Wilbraham closed down MacGillivray after a short backpass; the ball bouncing off the striker and wide of the post.

With his teamtalk possibly already in his mind, Brian Barry-Murphy’s job at the break got a little harder when Ethan Ebanks-Landell brought down Nathan Thompson inside the box. Brett Pitman stepped up to send Lillis the wrong way as he rolled the ball into the bottom right hand corner.

The visitors gave themselves a life-line nine minutes after the break; Wilbraham netting his 4th goal of the season. Olly Rathbone’s tenacity to win the ball back inside his own 18 yard box saw Dale break away. Henderson found McLaughlin who in turn sent the ball to Matty Done. The former Barnsley man managed to release Wilbraham inside the box to coolly slot past the keeper.

With the game in the balance, Dale wanted to keep their hosts at bay for a spell but Kenny Jackett’s side soon restored their two goal advantage. Lowe once again beat Bunney down the right to cross for Evans who nodded in from three yards out.

3-1 soon became 4-1 when McNulty allowed the ball to bounce which gave Lowe the chance which he duly took. The winger raced in to steal the ball, rounded Lillis and finished to cap his man-of-the-match performance with a goal.

Dale were well beaten in the end but head into the next three games against sides in and around the bottom of league One knowing fate is in their own hands.