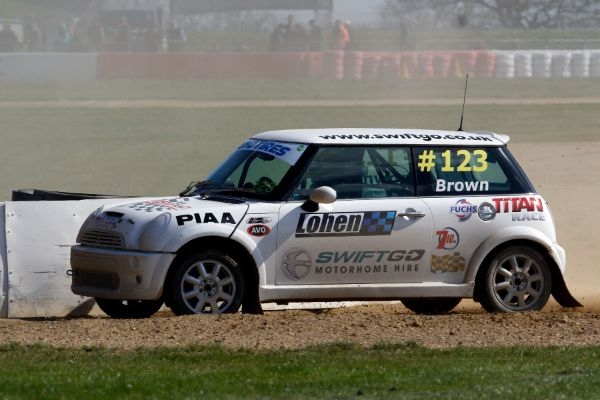 Steve Brown will aim for a decent result at Lydden Hill

Brown will once again be piloting his Bellerby RX Racing Team BMW Mini in the ultra-competitive single make formula within the British Championships and despite losing power and steering in the Silverstone Final, he was able to secure valuable points towards his maiden season. He will now head to the Kent circuit on Sunday with the hopes of securing a better result on only his fourth race of his career.

The Rochdale driver has made a successful switch from stage rallying to the circuits this season, after a handful of guest outings in the past gave him the opportunity to commit to a full season in 2019. Thanks to the support of Lohen, Swift GO, Fuchs Lubricants and 710 Oils, Brown will contest the eight-round series alongside Bellerby RX teammate Drew Bellerby.

His debut in March was an encouraging confidence boost for the Questmead Sales Engineer, securing an impressive second place in the semi finals before power steering failure and loss of power curtailed his hopes in the final. Despite his fortunes, Brown had a consistent weekend and the rookie driver is now looking forward to picking up where he left off.

"Silverstone was such great fun and although it felt like one big learning curve, by the end of the weekend I really started to feel at home in the MINI,” said Brown.

“There were some really encouraging signs that weekend and I know where I need to make up time and adapt better to the surface changes, so I just need to take everything I have learnt and put it into practise at Lydden now. It’s a great circuit and I can’t wait to compete there. It is dubbed at the home of rallycross in this country, so the track is most certainly made for it.”

After his Silverstone final woes, the BMW MINI is fully repaired and ready for action.

Brown said: “The team managed to trace the issue and rectify it, so it’s all systems go. I really hope to improve on my results this weekend, especially in the heats which will hopefully make the finals a little easier. The downside is I won’t be at the test on the Saturday due to other commitments and I haven’t been in the car since Silverstone, but I’m sure I`ll pick it up quickly enough. Not having to learn the ropes again will hopefully make it a much smoother weekend.”