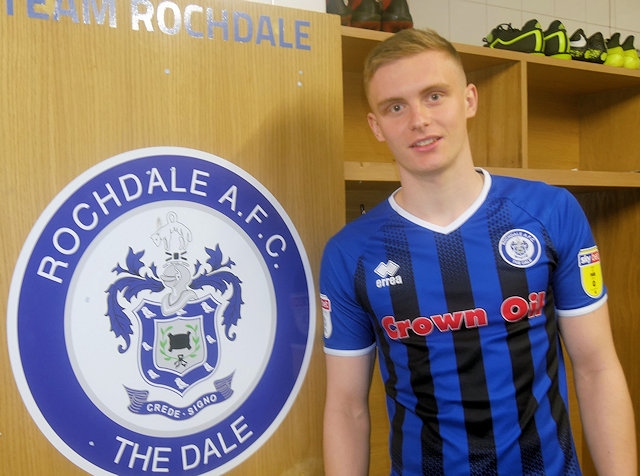 Ethan Hamilton scored the only goal of the game as Rochdale edged closer to securing their League One status with a hard-fought win over relegation rivals Bristol Rovers. The on-loan Manchester United man fired in with eight minutes remaining after Aaron Wilbraham’s clever knock down. The win moves Dale onto 51 points; five points clear of Scunthorpe (in 21st place) with two games remaining.

After a win over Wycombe on Good Friday, manager Brian Barry-Murphy made four changes for this Easter Monday trip to Bristol. Kgosi Ntlhe & Ryan McLaughlin missed out through injury with Matty Done and Olly Rathbone rested. Jimmy Keohane, MJ Williams, Stephen Dooley and Ethan Hamilton were given starts.

On a very warm spring day in the south west, the home side knew a win would see them safe from any relegation fears whilst a win for Dale would see them almost safe.

In a scrappy, tense affair, it was mistakes at the back by the Rochdale defence that almost gifted Rovers the lead. Jim McNulty’s under hit back pass was intercepted by Jonson Clarke-Harris although the strikers indecision allowed Ethan Ebanks-Landell to get back and tackle.

Another mistake at the back, this time by Josh Lillis, saw Liam Sercombe race in on goal; his shot flashing across the face of goal and wide.

The second half improved and as the game wore on, Dale looked more dangerous. Stephen Dooley volleyed wide whilst a pass back to Bonham saw the keeper smash his clearance into Henderson; the ball spinning close but not over the line.

The home side, backed by a vocal 8,000+ crowd, thought they had edged in front when Clarke-Harris curled a shot at goal; Lillis beating his effort away.

The only goal came with eight minutes left. A deep cross from Bunney found Henderson with the captain unselfishly picking out Hamilton with the Scot scooping the ball into the top left-hand corner from 12 yards out.

Bristol piled on the pressure in the closing stages with Dale standing firm as they held on for an important win that lifts them above their hosts and to within a point of securing their league one status.