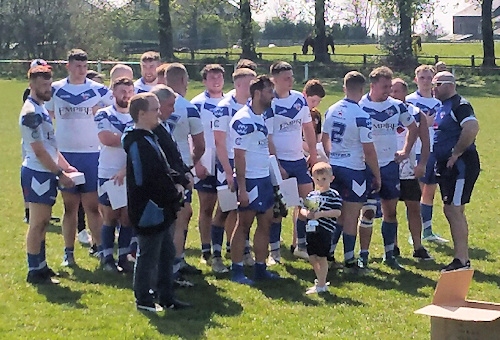 The game started with a huge hit straight from the kick off that saw Mayfield man of the match, James McDaid, dislodge the ball from the Saddleworth catcher, but mistakes and penalties gave the Oldham side three repeat sets on the Mayfield line, and ex-Mayfield and Hornets veteran Chris Hough capitalised to take a try and 0-6 lead.

The game was nip and tuck and it took until the 35 minute mark for the next break as Johnny Marsland intercepted and rumbled down field, unsurprisingly the cover caught him, and Saddleworth took advantage of the broken play to score their second for 0-10.

Mayfield hit back when short passing right to left found space and magnificent wide passing left to right found Luke Fowden in space to score on the right corner. The conversion made it 6-10 at half time and the Mayfield team were well in it.

They had the worst possible start to the second half though as Saddleworth scored straight off the dropped restart for 6-16. Mayfield were trying expansive and exciting rugby league, with Jordan Parr, Corey Newsham and McDaid partucularly impressive, but another error gifted Saddleworth a try for 4-20.

Ex-Hornets professionals Ian Sinfield, Michael Coates and Hough had the experience for the Oldham side but when Mayfield finally got some field position, smart wide hands put Christian Avis in the corner, converted off the touchline for 10-20.

15 minutes to go and Mayfield were in the ascendancy - but as penalties kept them out of the Saddleworth half, man of the match Hough crossed for a Saddleworth try and converted that and another try for 10-32.

Mayfield's lads never gave up though and in what seemed like a rare visit to the opposition half, Zac Hartley's pinpoint kick to the corner found McDaid who scooted in for 14-32.

Amongst the best of the forwards were Sean Mulcahy and hooker Callum Corcoran, and they combined to finish the scoring as Mulcahy smashed through under the posts for a Zac Hartley converted try and 20-32.

In the end Mayfield's second string fell short but they did the club proud with their effort, and no little skill, to match the Conference League Rangers. Observing first team coach Sam Butterworth was impressed with the youngsters play and Chair Simon Howe said: "The players today are disappointed with the loss but as a club we couldn't be prouder of their efforts and they showed the strength of the club and of their mateship."