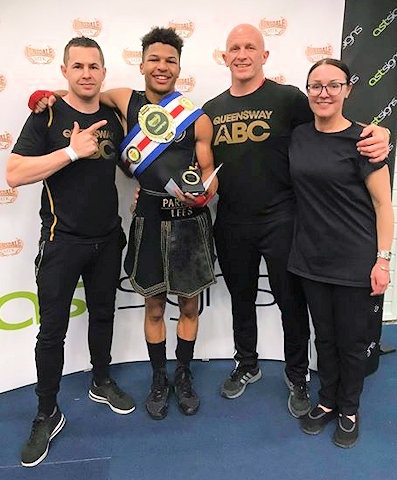 Queensway ABC's up and coming star Parnell Lees travelled to Penrith, Cumbria last weekend for the MTK 2019 Box Cup, which saw more than 120 boxing clubs attend with over 400 boxers fighting it out to land the main prize, the Lonsdale belt.

Parnell Lees was boxing in the youth category in which he was the youngest entrant.

In his first round he boxed a very strong lad from Beartown ABC being two years his senior at 18 which made a big difference.

It was a close bout in which both lads enjoyed success, but Parnell was cleaner in his work and finished the third round stronger which gave him a place in the final on split decision.

Coach David Hodkinson said: “When Parnell came back to the corner at the end of the fight he told me that he literally hit him as hard as he could, and he didn’t take a backwards step.

“We knew before the fight he was going to be strong; you can just see it sometimes.”

In the final Parnell was up against a tall and rangy fighter in Tim Murphy from Love ABC CPC.

This final had all the makings of a great bout and that’s what it was.

From the first bell both boxers went for the kill making it a scrappy start, both trying to show their dominance.

A close round one, but Parnell’s power had started to show already.

In round two Parnell picked up the pace and pushed his fighter on the back foot where he pretty much stayed for the duration of the round.

At the end of round two Parnell knew he had won the bout already but wanted to cement it properly and produced a very dominant final round to land the belt.

“It’s been a great journey working with Parnell since he first arrived at the club and we’re very impressed how far he has come along. He is growing as a boxer and young man week by week.”

The second final of the day was defending champion Danyal Mahmood, who was returning for his first fight in over a year as he had been out with a hand injury that just wouldn’t correct itself.

Danyal won the belt last year in the 52kg category and this year entered to defend it in the 52-56kg category, but unfortunately there was no entries at this weight, so he had to enter in at 60kg.

Coach David Hodkinson said: “We knew going into the box cup that this was a big risk as Danyal is naturally a 55/56kg boxer, but it was either that or don’t box, so we decided to give it a go.

“In the final he was up against a very strong and scrappy boxer who spent all three rounds literally dragging Danyal around and not allowing him to box at all.

“It was a very scrappy affair in which we lost.

“Although Danyal was disappointed with how the fight went he took away one positive, and that was even in with lads 4kg heavier he still held his own.”