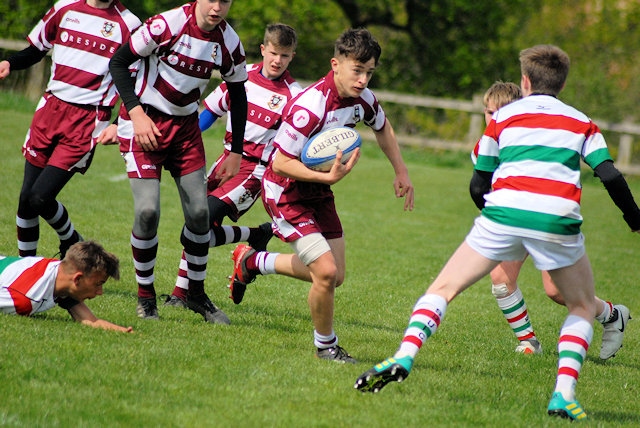 Rochdale RUFC U14s travelled to Stockport for the final game of the season. Having narrowly lost earlier in the season, Rochdale were hoping to sign off with another complete performance.

So, after losing possession from the kick off and watching the ball moved to the left winger who then flew along the touchline and round under the posts, things didn’t look too rosy. However, if there is one thing that Rochdale have learnt to cope with this season it’s speedy wingers, and they didn’t make the same mistake twice.

Rochdale’s press defence has been improving steadily as the season has unfolded and it was fully functioning after the initial blip.

Time after time the opposition were either caught in possession and driven back or forced into a rushed and inaccurate pass. Rochdale eventually began to create some attacking phases with James O’Connell, Kai Potter and Nick Wright all carrying strongly, ably supported by Ben Sunderland, Charlie Bleackley, Bendan Hankinson, Paddy Kershaw and Joel Rigby at the breakdowns. After a turnover on halfway, the ball found its way to Ben Kershaw, who cut back preserving the space out wide and allowing James Tasker to loop around to score in the corner. 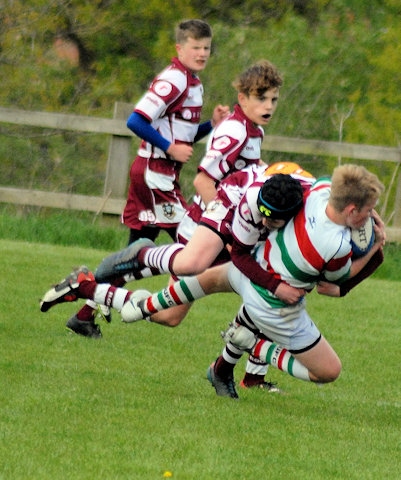 Stockport were struggling to exit their half now and, after more good driving play, the ball was switched back for Mitch Holt to scythe through a gap and put Rochdale in front. Rochdale turned two tries to one to the good, no conversions due to the pitch size.

Rochdale continued to play with flair and enterprise. Ollie Simpson fielded the high ball on half way, beat a couple of defenders and then hit the wing with an excellent pass.

The ball was recycled and after two more forward drives O’Connell got the try he deserved, forcing over from five meters out.

Stockport were off-side from the kick off which gave Rochdale great field position. From the subsequent scrum, Wright sucked in the defence and provided quick ruck ball allowing Holt to attack the space, he drew the last man and fed Danny Nobis on the right wing who touched down in the corner.

Just when Rochdale looked to be pulling away, the Stockport centre found a gap and broke clean to the try line. This sparked Stockport into action with a period of sustained pressure, however, Rochdale’s defence was up to the task and forced an interception allowing Ben Kershaw to race to the try line. This finally broke Stockport’s resolve and further tries followed from Will Simmons, after some more good pick and drives from quick rucks, and Ben Kershaw on the end of a sweeping backs’ move. 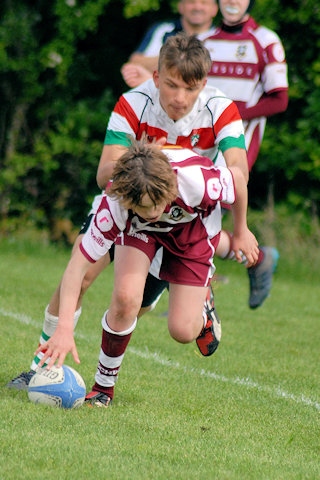 A really good game with scrums and lineouts setting a very solid platform allowed Matt Dearden to bring the backs on to the ball and make good yardage. There was great work from Tasker in both attack and defence, and standout performances from Ben Kershaw and Potter.

Man of the Match this week went to Danny Nobis for some great defensive work against a very dynamic winger coupled with some incisive breaks and a try to round it off.

A great final match to end an excellent season, Played 27; Won 16; Lost 11. All facets of the team's game have improved, set pieces, defence, attacking lines, but most of all the camaraderie and team work always shine through. With all players growing into fine young men, it is not always plain sailing but when the team works together, they can overcome pretty much anything.