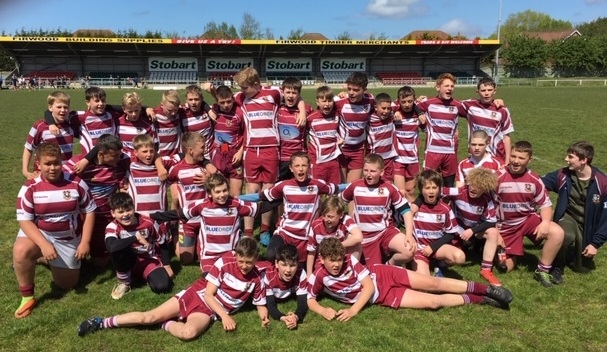 To cap another outstanding year for Rochdale's Under 13 Boys, they  were crowned Champions of Lancashire on Sunday 5 May after a close encounter with Waterloo RUFC.

The match was hosted by Waterloo, due to four Lancashire Finals being held at Rochdale RUFC.

Having another successful season undefeated in their match games, Rochdale U13s have once again proven the quality of the boys game in Rochdale.

Sunday was a very close encounter, with Waterloo taking the lead just before half time.

After a team talk by Dan Kelly and Pete Collins they changed the match tactics and having ﬁnished two tries to one down at half time, Rochdale began to dominate the attacking play and ran in ten tries with no reply.

The ﬁnal score belies the true closeness of the game. Waterloo were formidable opponents and could have taken an earlier lead but for some ferocious tackling by the Rochdale boys.

This season is the eighth year some of the boys have been together and the skills they have developed and the strength and stamina which has been built up with their coaches has brought them through some very tough matches.

Our thanks go to the volunteer team coaches. Scott, Pete, Dan and Carl and to the ﬁtness coach Matt.

After a gruelling eight months of autumn and winter rugby, the squad have shown that they are an exceptional unit.

A spokeperson for the parents said: "As all the parents have said year on year, we and our boys are here for the family atmosphere which Rochdale RUFC present every time we are present.

"RRUFC, has been an integral part of all our families and we are proud to say, thank you for all the opportunities you have given our boys and the family hospitality you have given us all."